Notorious RBG: The Life and Times of Ruth Bader Ginsburg Exhibit at the Skirball

- February 26, 2019
I flew to LA this past weekend, and checked out the "Notorious RBG" exhibit at the Skirball with my law school friends Josey, Betty, and Jocelyn, (and Betty's bf Brian.) 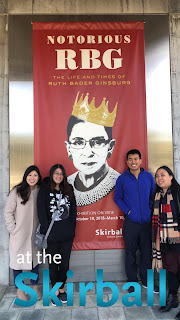 The Skirball is a Jewish Cultural Center off the 405 near the Getty and Westwood. It was my first time visiting even though I had been around UCLA from mid 2008- mid 2013. Parking was free, and my friends and I strolled along a mini-garden to the main entrance. We paid for our admission, and I saved $3 by presenting my law student ID (it doesn't have an expiration date). We also reserved tickets an hour and a half later for the Noah's Ark exhibit, but the RBG exhibit was included with general admission.

Almost immediately past the ticket counter there was a giant wall showcasing RBG with fun "photobooth props" featuring signs with phrases such as "I dissent," "Shero," and other quotes. 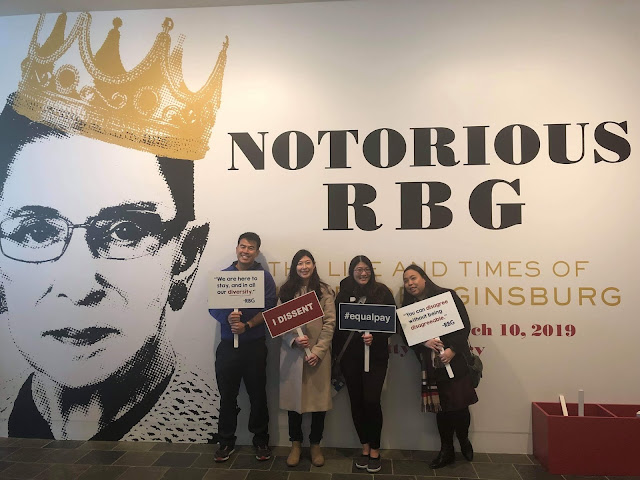 We browsed the museum, learning about Torahs, Synagogues, and the culture and history of Jews who immigrated to America from Europe. We then made our way to the RBG exhibit, which was very crowded and filled with various groups and tours. 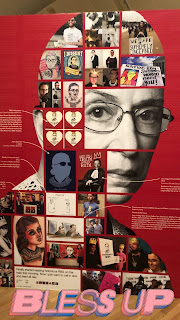 One of only two allowable photo spots in the actual exhibit. A docent stands in the beginning and tells you that there are only two designated photo spots.

The exhibit was divided into sections focusing on different aspects of RBG's life: professionally and personal. It was very cool to walk and sit in her recreated living room or see what her desk might have looked like. The exhibit was basically a more interactive version of the recent documentary (NOT on the Basis of Sex), as parts of the exhibit did feature clips of the documentary.

As you walk in the large loop, you see items related to RBG's seminal cases/decisions, and even jabots that she personally lent for the exhibit. The different sections also have different color themes, and there is a lot of information to read/watch/listen.

At the end, there is a fun photo op pretending to at the Supreme Court of the United States (SCOTUS). There's a closet with various size robes and even a few jabots! 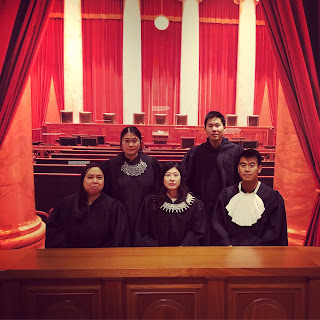 The robes might smell like mid-aged women perfume just FYI, and we actually had to come back for this SCOTUS pic because there were so many people trying to get a picture. If I had tried to read everything, I could've spent 1-1.5 hours just at the RBG section alone. But since I had watched the documentary, I skimmed most things. It was very cool to check out, and the exhibit is only going on til March 10.

Besides the RBG exhibit, the Skirball also had an archaeology exhibit where we dug out of a sandpit for 5 minutes, and a Noah's Ark exhibit which was a playground made of recycled items. It was definitely more of a family place, but still fun to check out. If you're around LA and want to be inspired by the life of a female and Jewish SCOTUS justice, I'd recommend checking out the RBG exhibit at the Skirball!
Culture Law Los Angeles RBG Skirball Travel