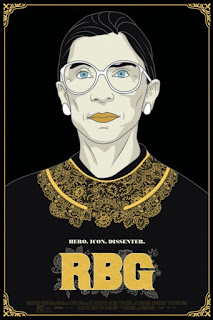 I attended a screening organized by "Women in CA Leadership," who invited State Capitol staff to view the 97 minute movie in the Crest Theater in Sacramento. 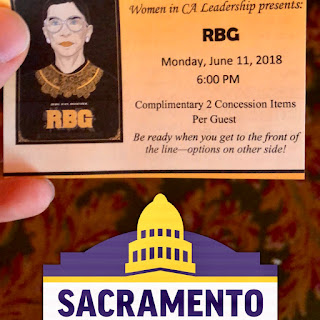 I got my tickets for free concession items, and got a dark chocolate Haagen-Daz bar. Nearby, I saw Chief Justice of the California Supreme Court, Tani Cantil-Sakauye (TCS), and introduced myself as a UC Davis Law alum (where she also graduated law school!) as well as a current attorney for the Governor (she had the same title for a different Governor). After getting some sage advice, we went inside the theater, where the event organizer announced that TCS would make some remarks. TCS said "there's so much to love about [RBG]!" and then the movie soon played.

The documentary is an emotional journey, following RBG through her humble beginnings as the child of immigrants, finding the love of her life in college, and despite being incredibly intelligent- facing discrimination in the legal profession simply for being born female. It's crazy to think that just 40-50 years ago, women in one of the "free-est" countries in the world faced so much adversity. The documentary wonderfully captures how RBG used the law to become an advocate for women's and minority rights.

While being extremely informative and showing RBG's greatest legal accomplishments pre and prior Supreme Court appointment, the documentary is lighthearted when appropriate and very comical. There were multiple times when the entire theater was laughing, and many scenes and dialogue where you couldn't help but smile. One of my favorite parts was when her family members talked about how terrible of a cook RBG was and how they were traumatized from her food [I TOTALLY RELATE TO LACKING COOKING ABILITY].

Despite hearing so many of RBG's accomplishments and being extremely inferior in terms of my legal accolades, I was constantly feeling inspired by RBG's commitment to advocating for unheard voices. In a time where people in positions of power were unable to see other's problems, she used language and law to convincingly convey her point and change the course of American history. She is truly an understated hero, and I was also struck by how hard she worked - there were many times when her loved ones said they had to physically stop her from working and even at her current age she works til 4 AM.

RBG is one of the best documentaries I have seen in a long time. It is informative, emotional, and inspirational. There were many times when I was in awe of how America used to be, and how RBG used her love of the law to make an impact and better people's lives. From the plaintiffs she represented to the meme-creators, she has influenced so many people and cleared pathways to justice and progress. This documentary not only entertainingly captures one of the United State's most "Notorious" heroes, but has the potential to inspire others to become better advocates.
Government Judge Law RBG