Odette is a 3-Michelin restaurant in Singapore and currently No. 36 on World's Best Restaurant list (was no. 8 in 2021). 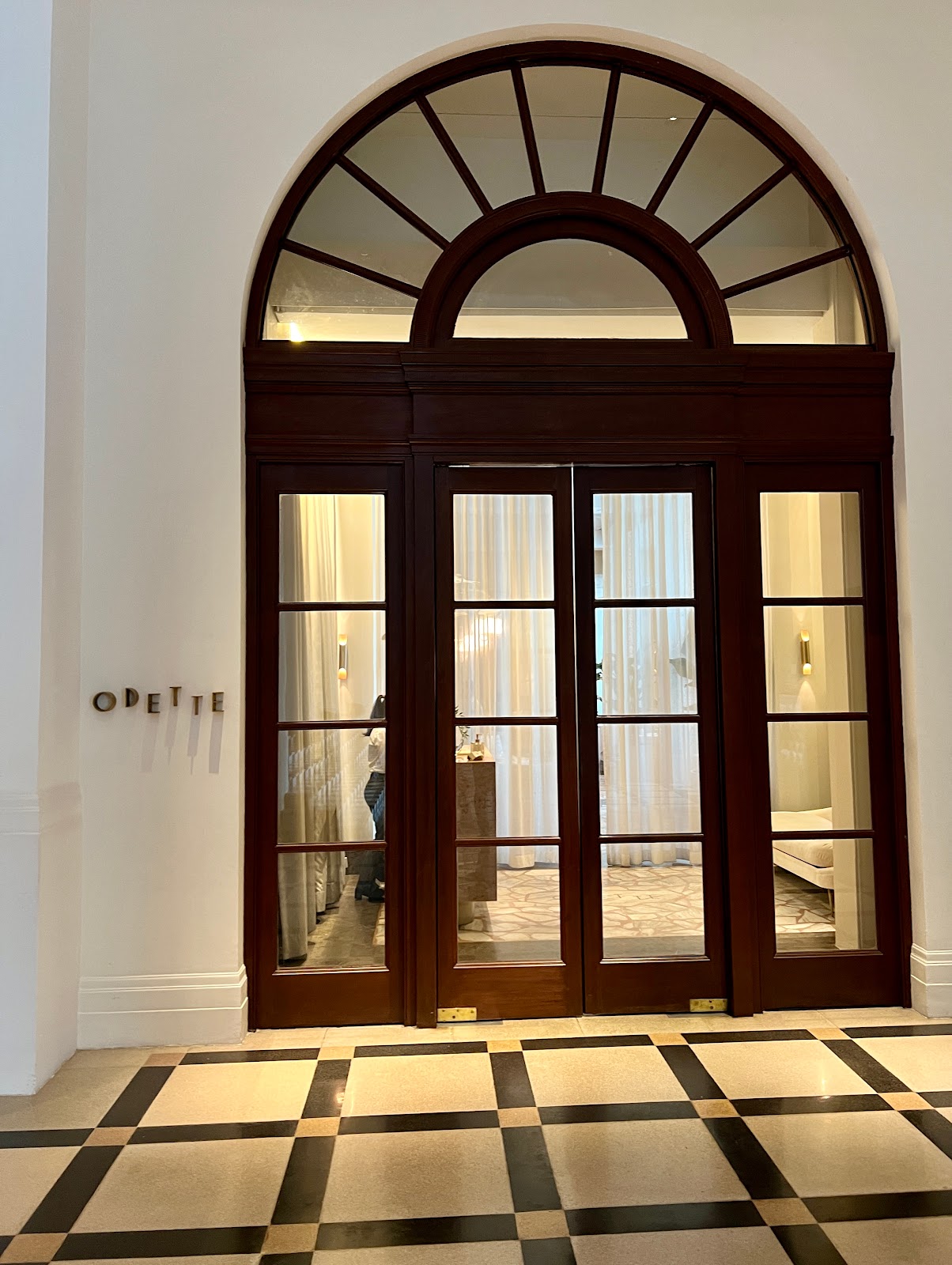 I went for lunch on a weekday after getting off the waitlist three hours before, so it was an unexpected surprise (and so was the lunch price at over $300 USD per person after a drink and tip). This French fine dining experience felt similar to the meal at French laundry, nothing mind-blowing, but still a solid meal. Some highlights of the meal were: mushroom tea, truffle brioche, and venison in nori.

Reservations are recommended two months in advance, but I emailed the week before to get on the waitlist, and they called my cell phone a few hours before lunch on the day of that they had room for lunch.

DRESS CODE: "smart business" - This meant closed-toed shoes, pants, and a collared shirt for men, but some guys at lunch had normal shirts.

LOCATION: Singapore National Gallery - an art museum that also used to be the old Supreme Court building. I called a grab (Singapore's Lyft/Uber), and it dropped us off at the opposite end of the Gallery which is the official entrance- it is a little annoying to traverse the entire Gallery to get to Odette (but at least we weren't charged admission fee and got to see some of the art).

We made our 1:15 pm reservation, and had a table in the middle of the room, facing the kitchen. 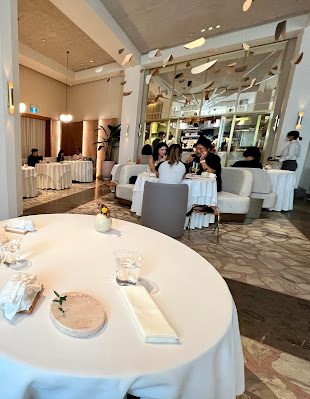 The dining room had pink hues with gold, and matched the abstract art in the Gallery. Many tables were for 2-4 people, and there was a private room that could hold a larger group.

Odette is named after Chef Julian Royer's grandmother, and this little card explained that the Chef is inspired by Mother Nature and simple ingredients. 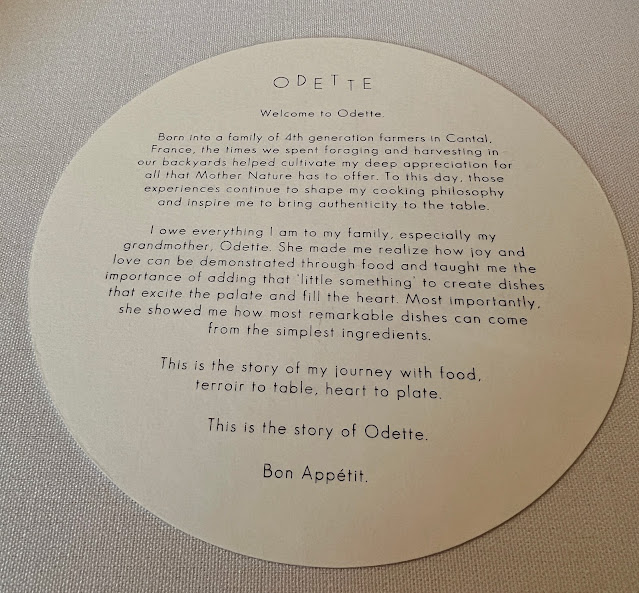 Amuse-bouche: a tart, "taco" with tuna, and cheese in the form of a fry. 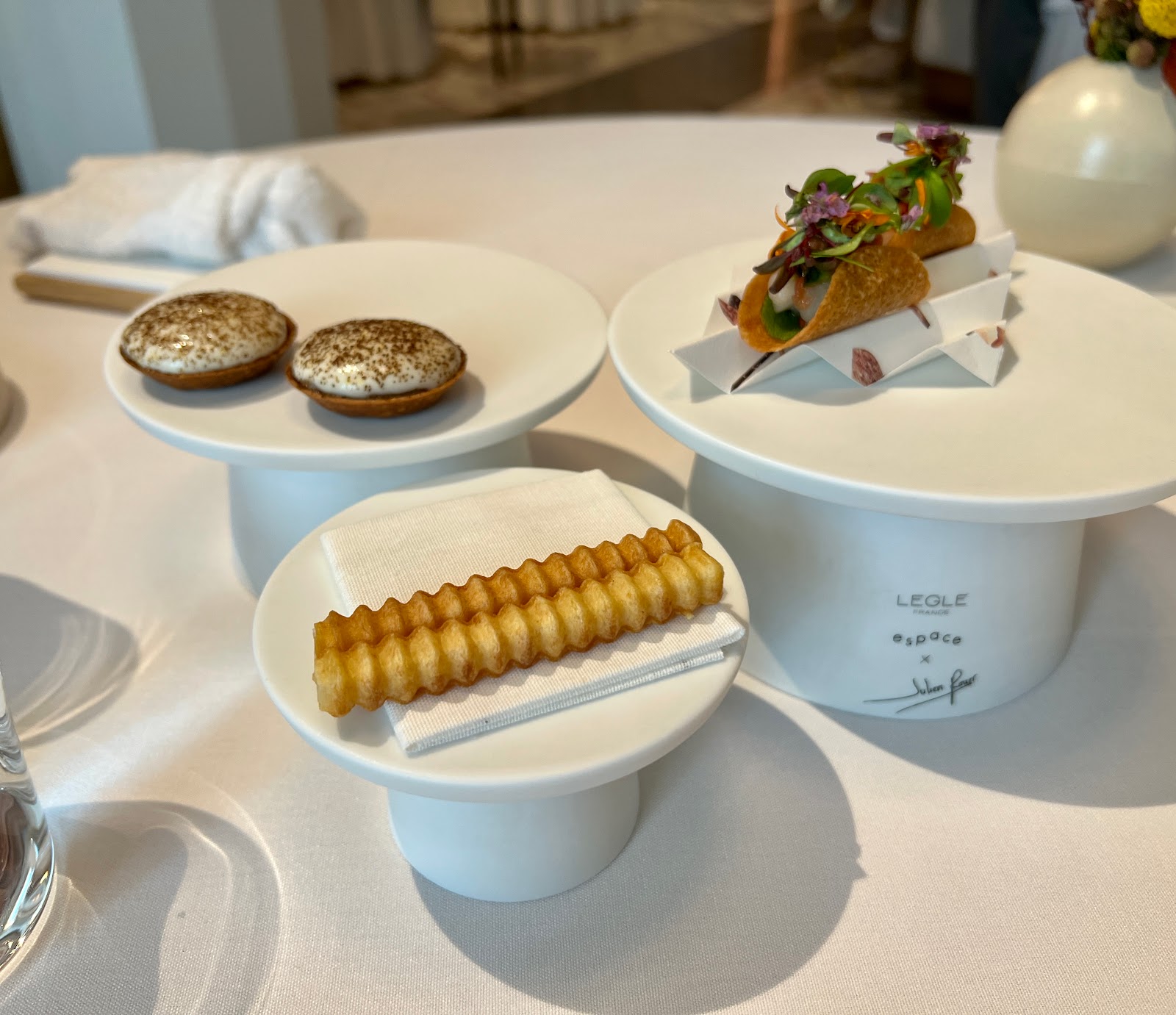 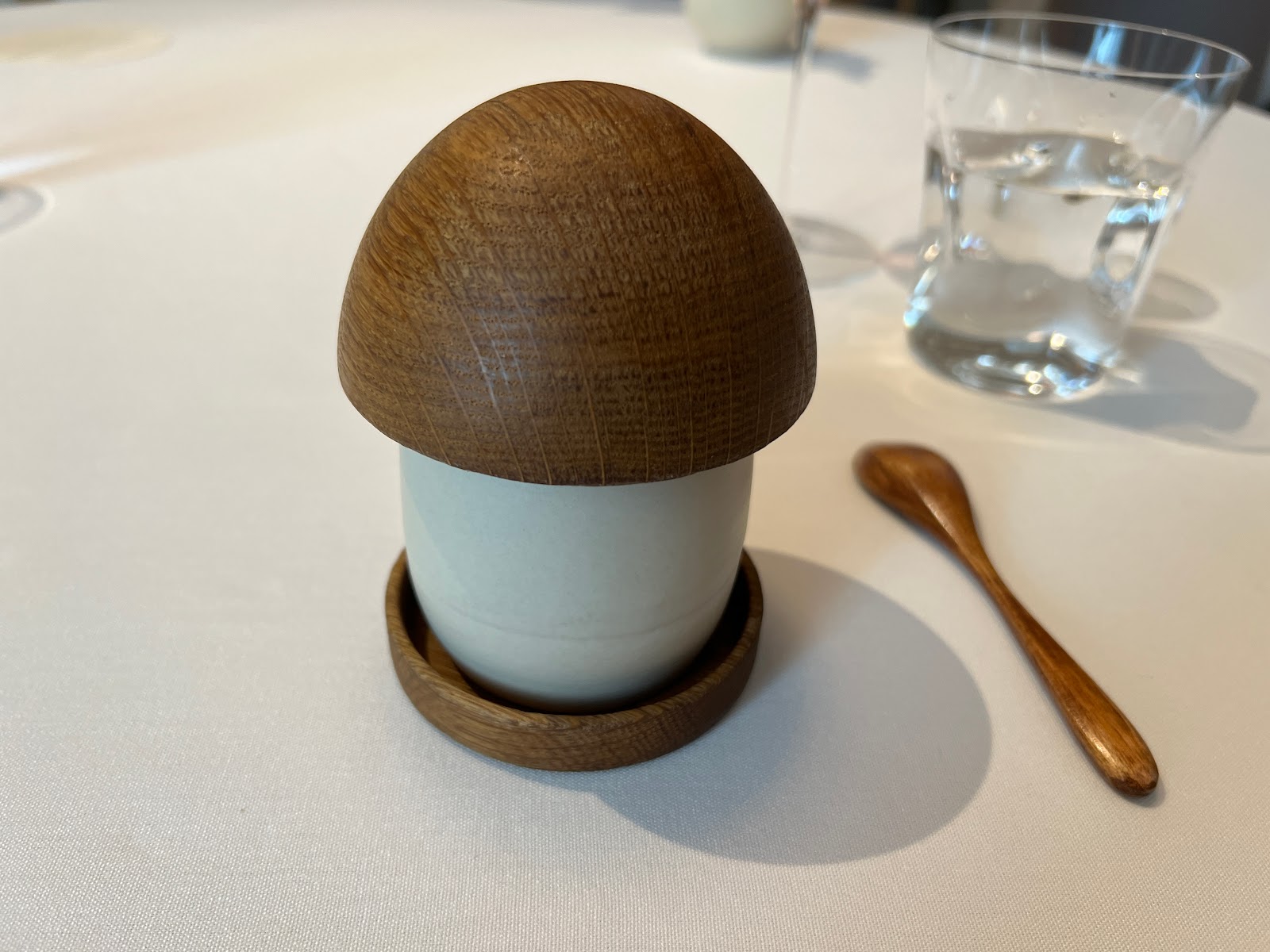 Underneath was soup with truffle shavings, this mushroom soup was earthy, savory, and I basically downed it while using the small wooden spoon to collect the truffle. 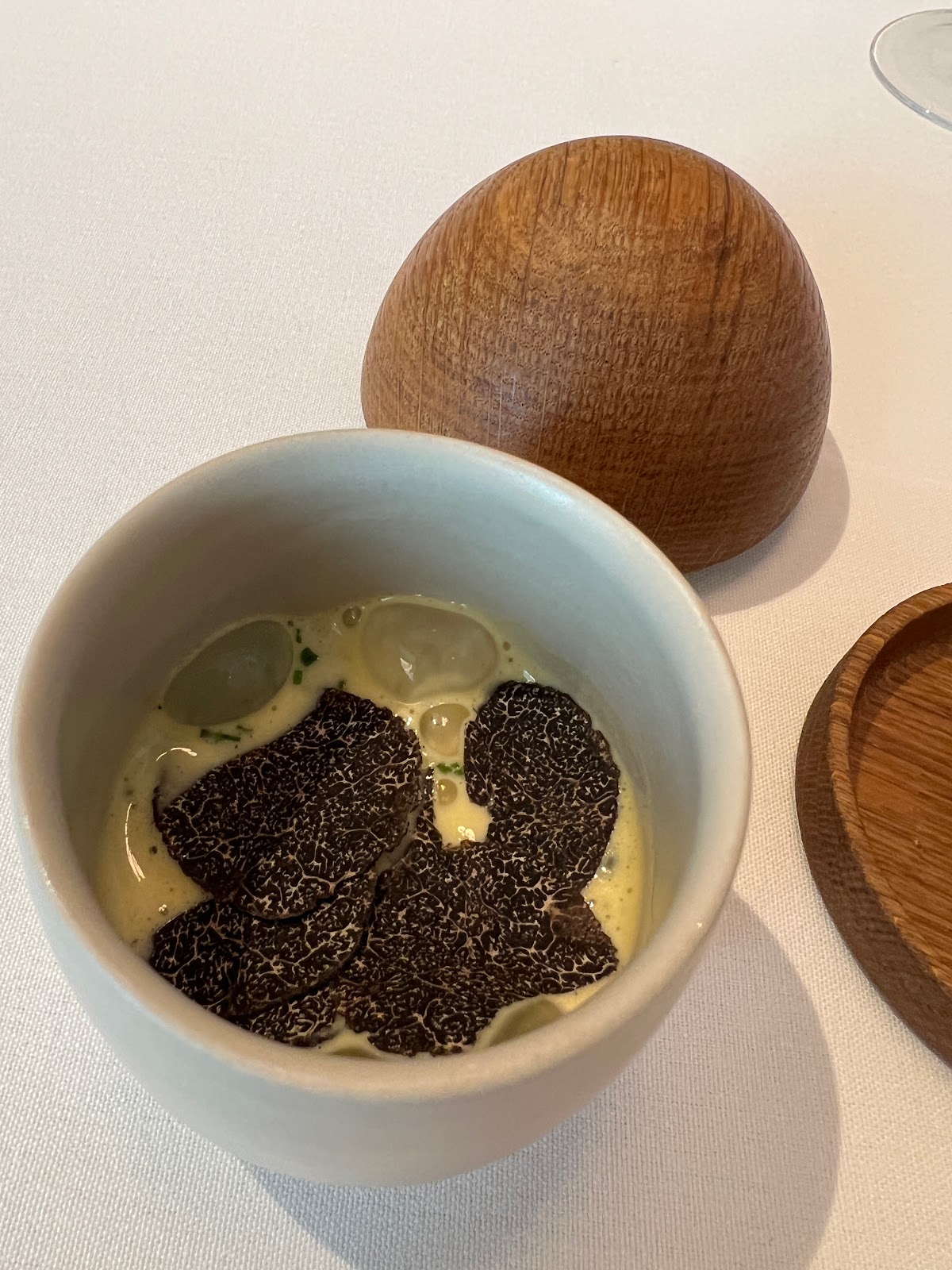 It was also paired with a truffle brioche. The bread was offered to be unlimited so we eventually had several more of these brioche. 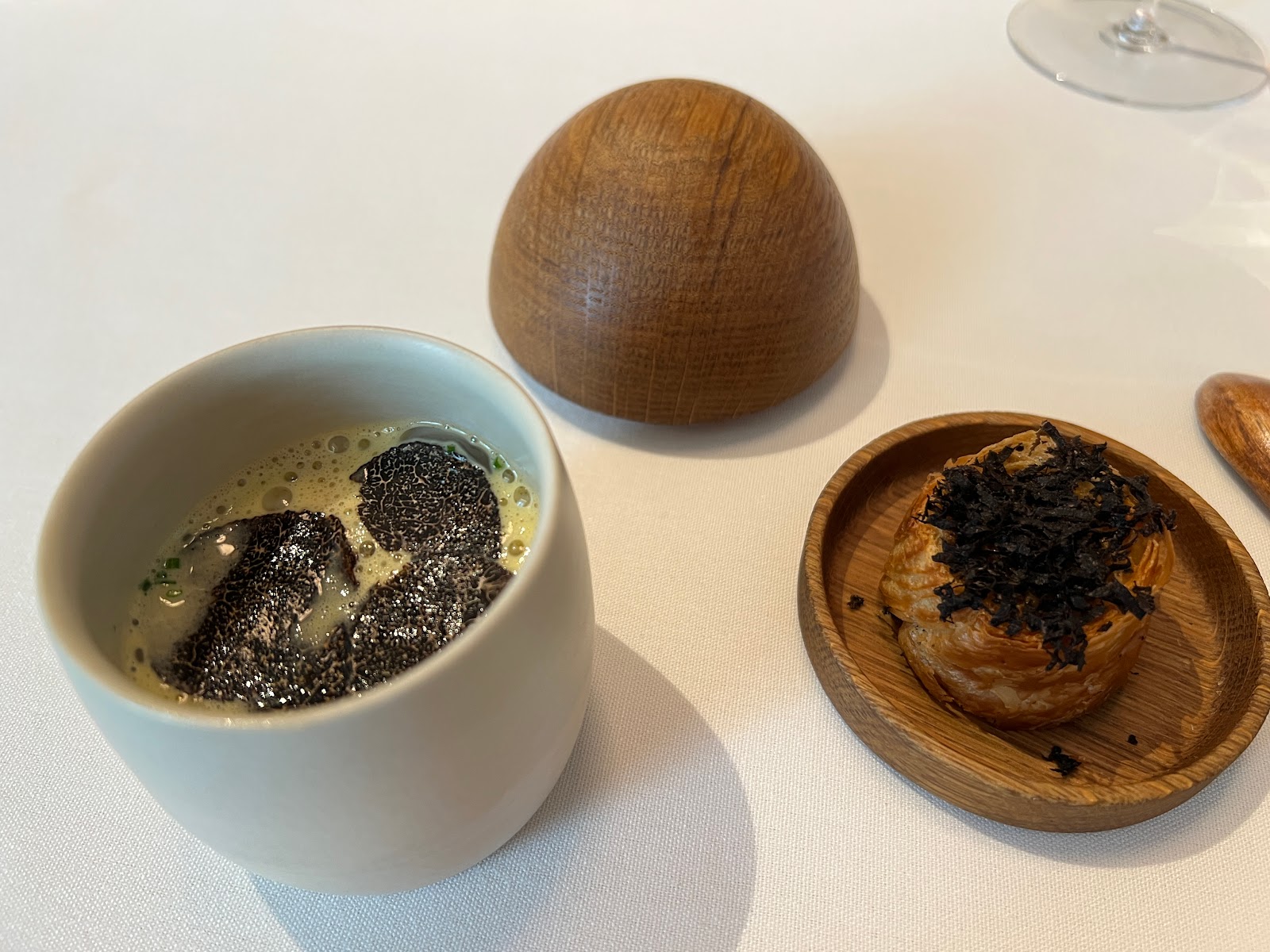 The menu officially had 5 courses, with grignotages (snacks) and douceurs (sweets) 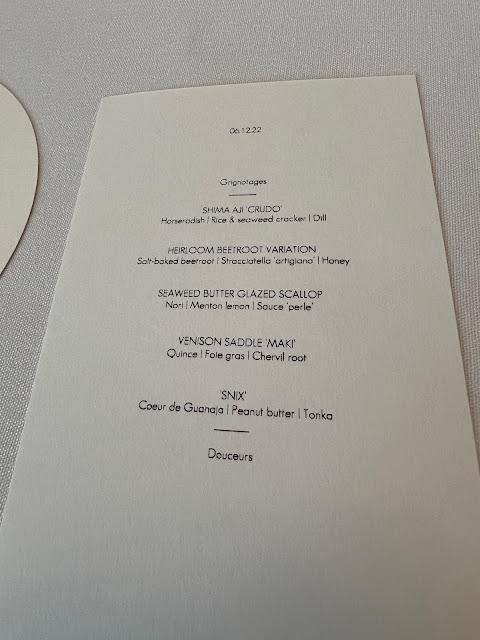 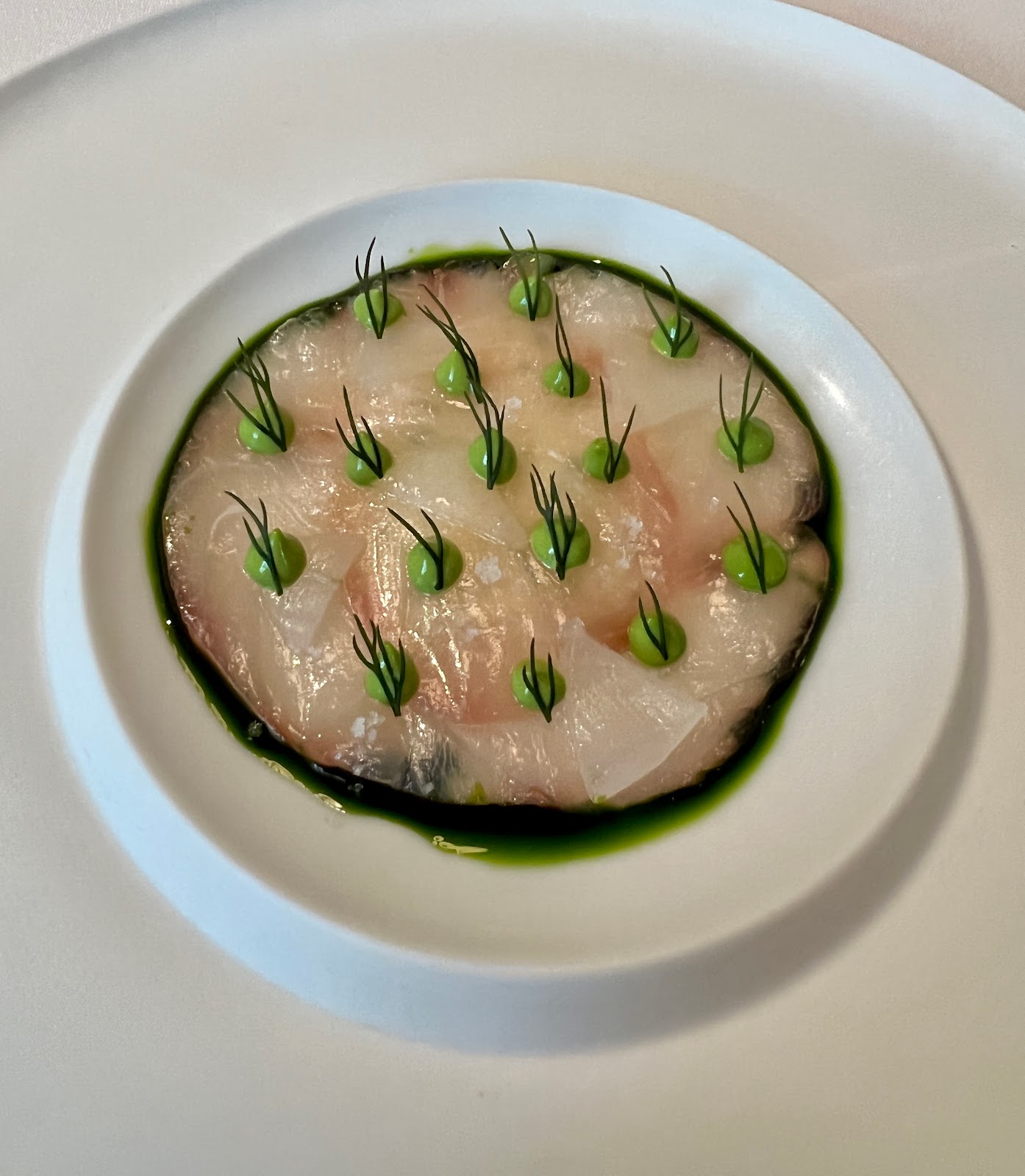 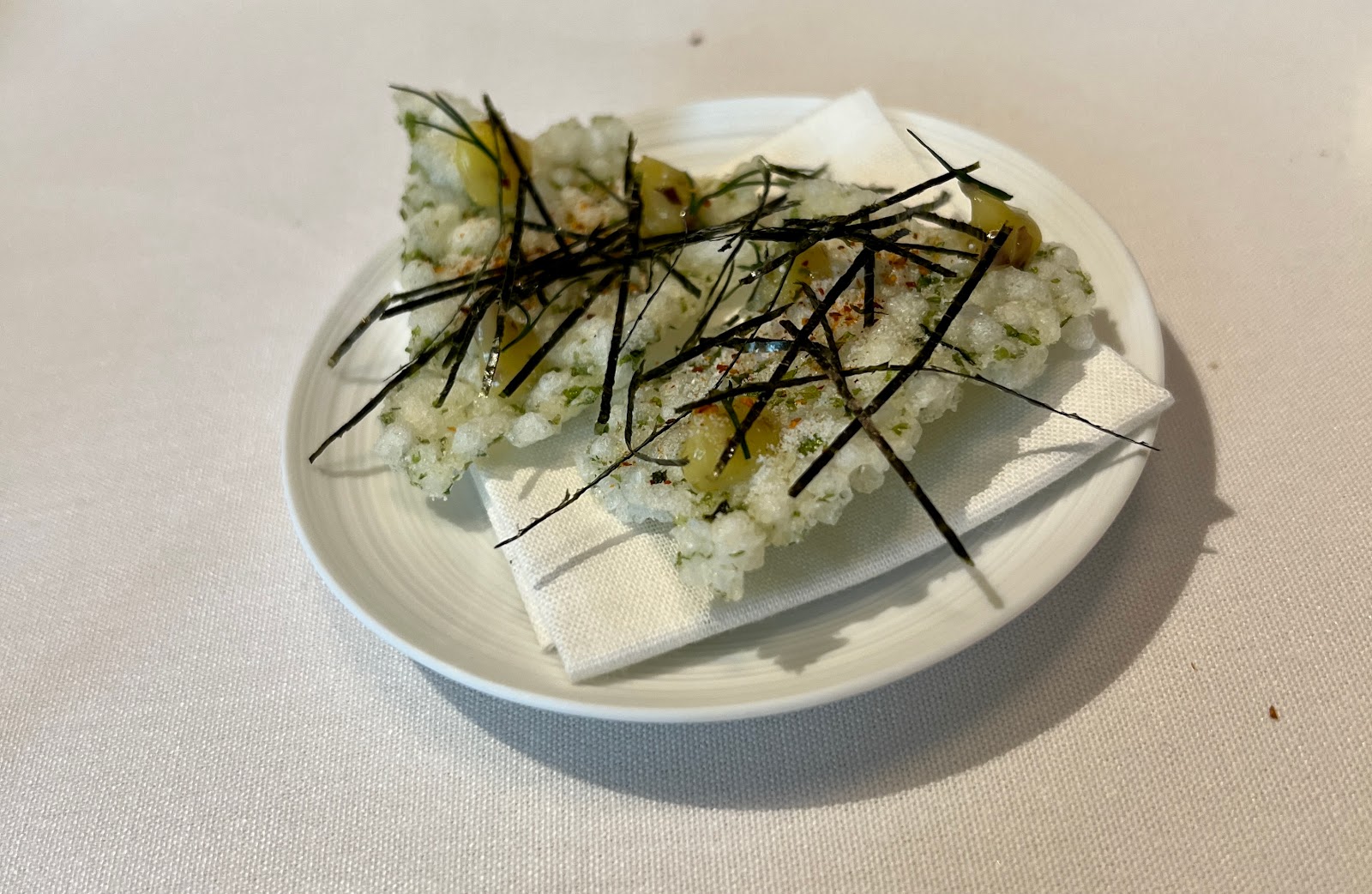 Not pictured: the server making it snow on the crudo - it was a nice winter effect. A dish that reminded me of Kusama appearance-wise, and a basic opener.
Course 2:
Heirloom Beetroot Variation
Salt-baked beetroot | Stracciatella 'artigiana' | Honey 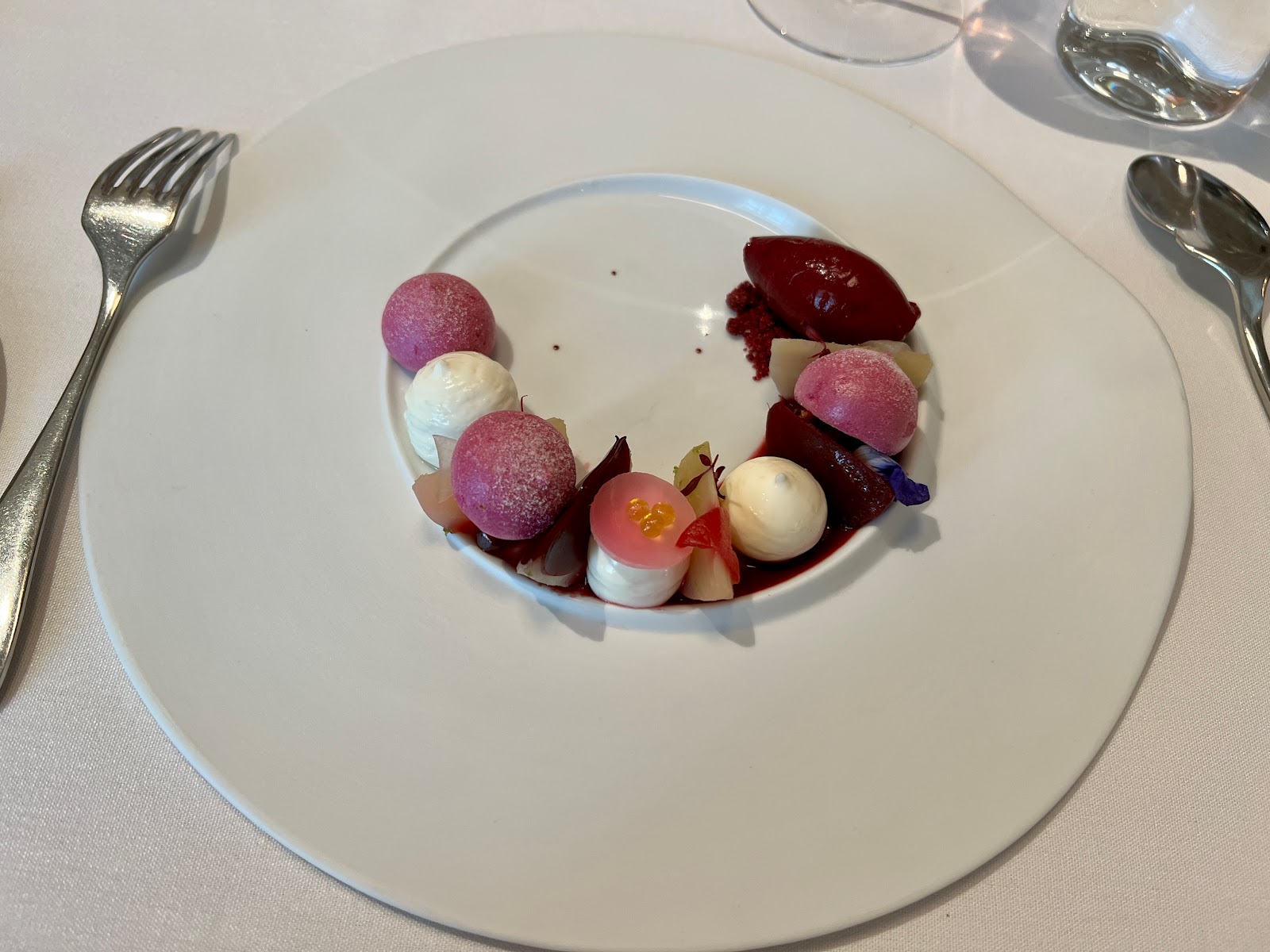 Basically cheese and beets in different forms - almost a dessert dish. While I like merengues, my favorite parts were the cheese and the beet sorbet.
Course 3:
Seaweed Butter Glazed Scallop
Nori | Menton lemon | Sauce 'perle' 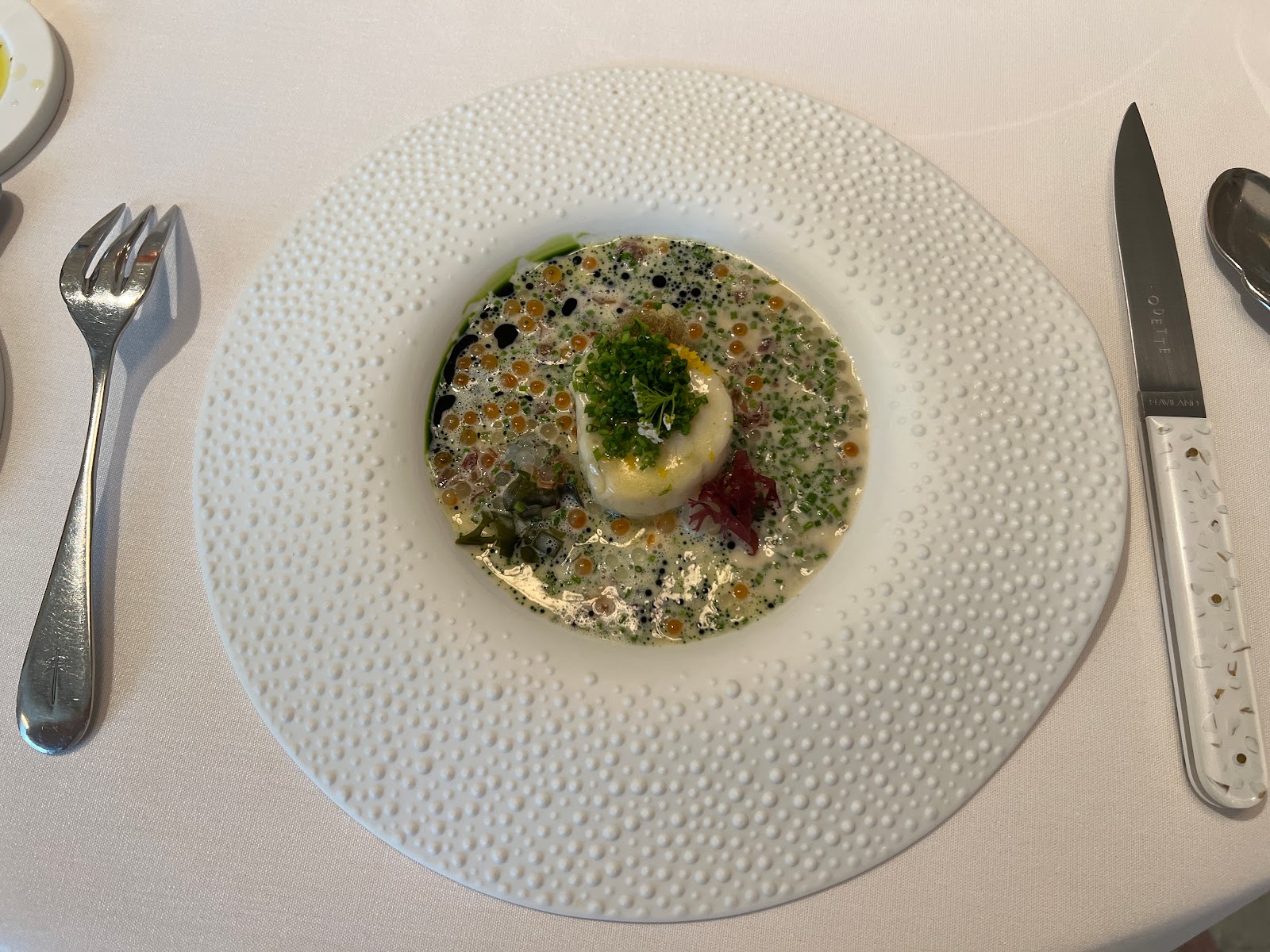 Another pointillism-like dish. The sauce was acidic which was nice, but I think the scallop and overall dish was still a little too briney for me and I wish it was more buttery.
Course 4:
Venison Saddle 'Maki'
Quince | Foie gras | Chervil root 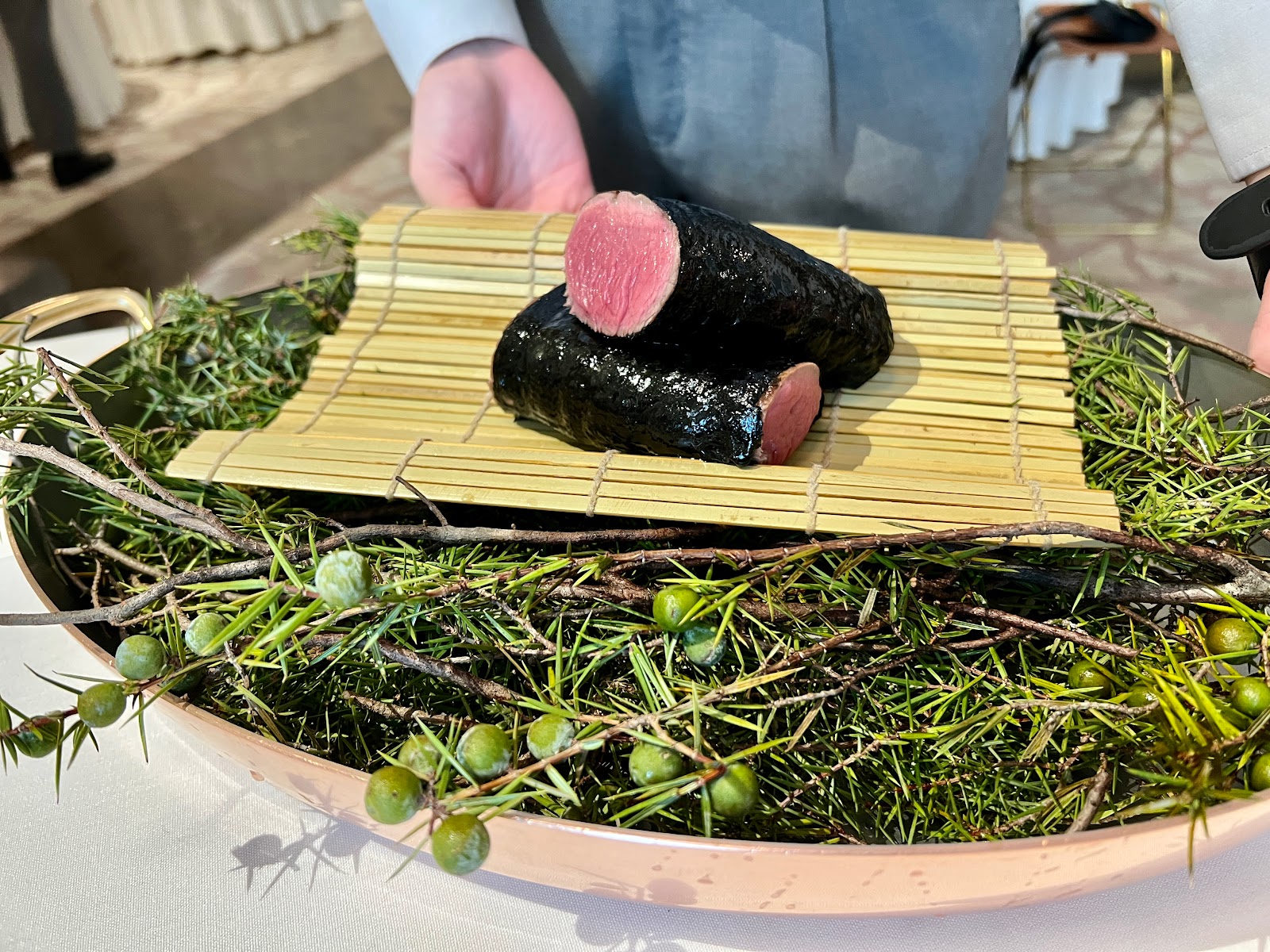 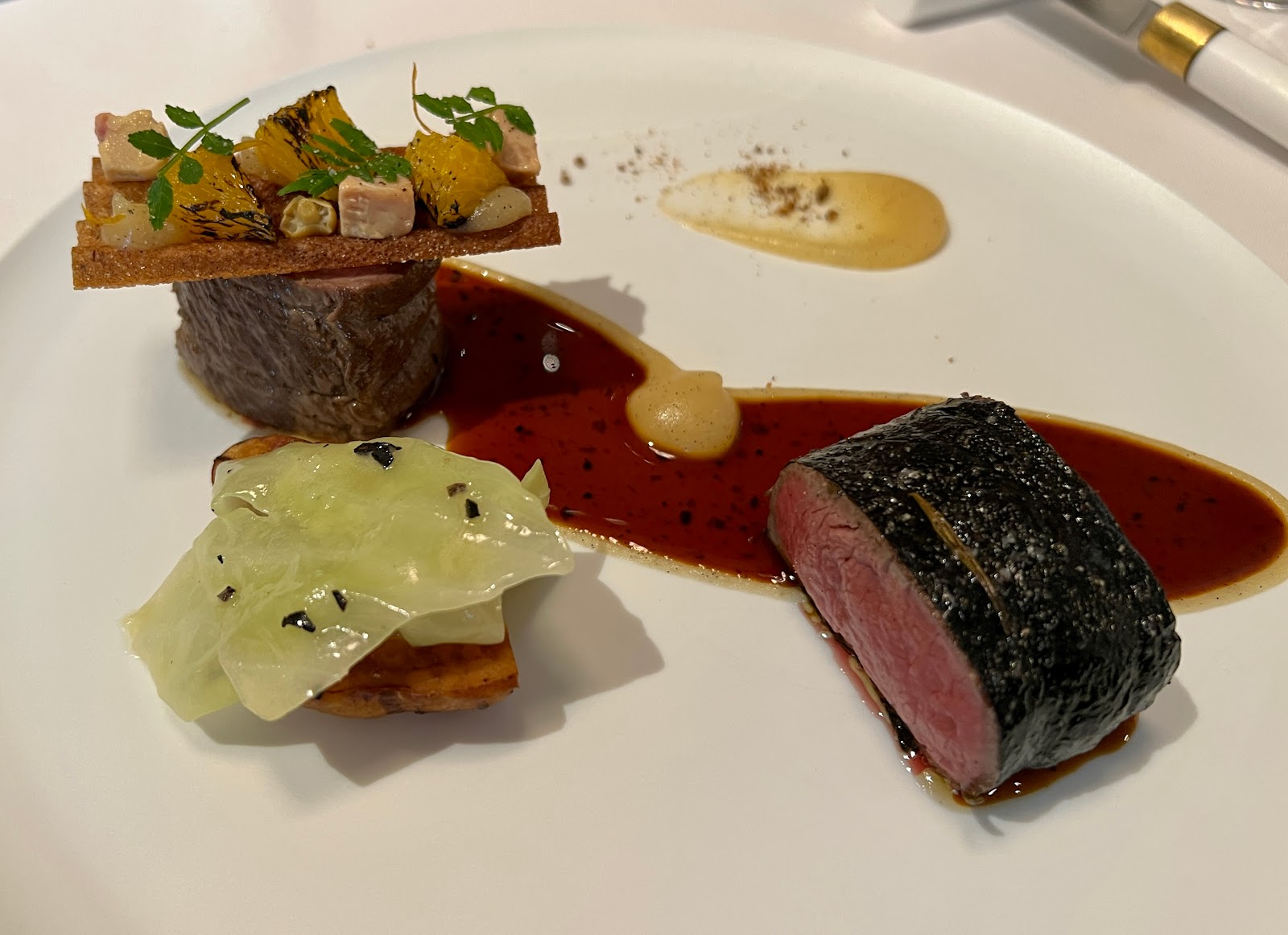 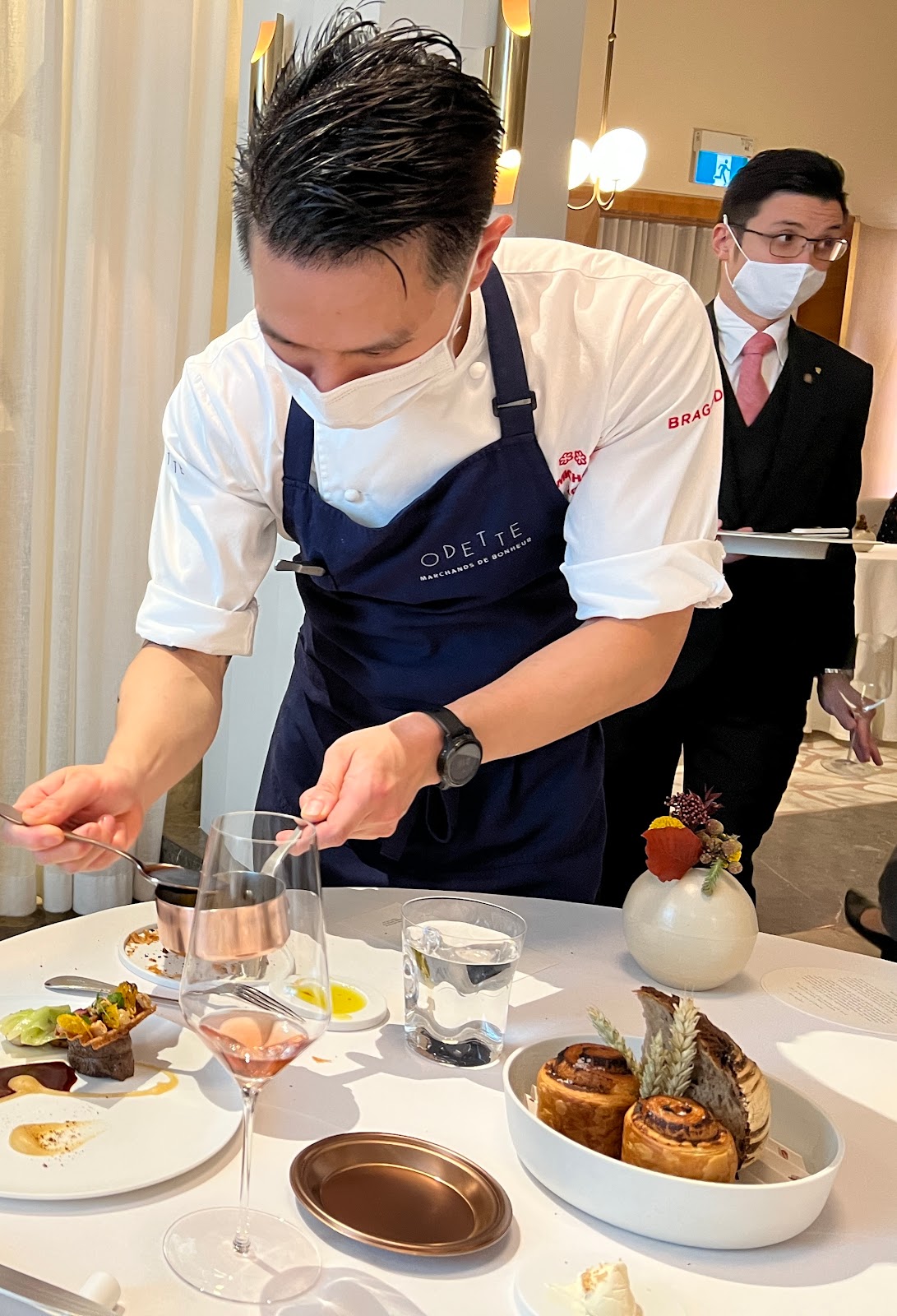 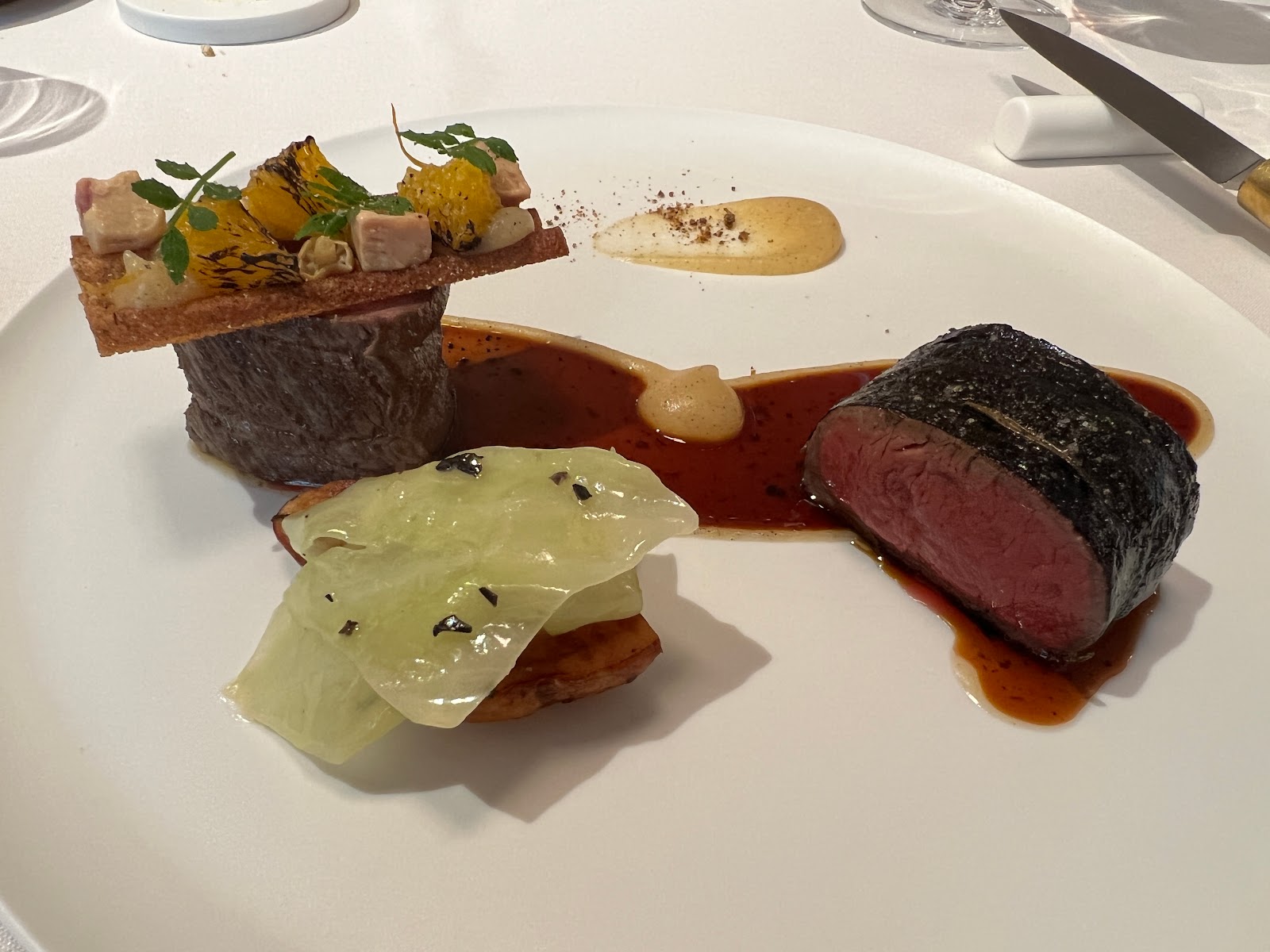 This venison wrapped in seaweed was probably my favorite course- tender, a little umami. The foie gras version didn't really do anything for me.
Optional: cheese course 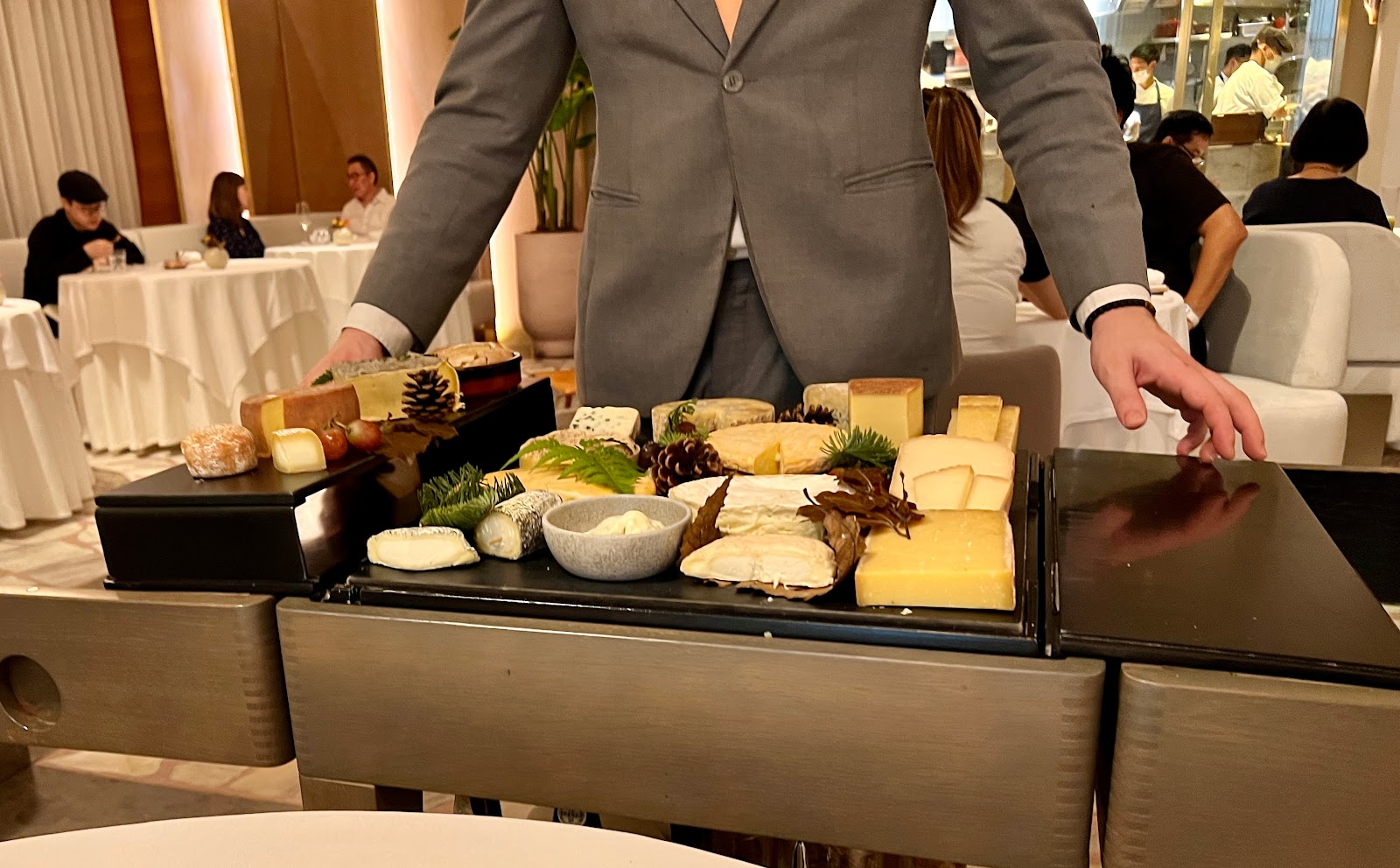 They brought out this cart but we were full and just ready for dessert. This was probably almost 2 hours into the meal.
Granita - pomegranate palette cleanser 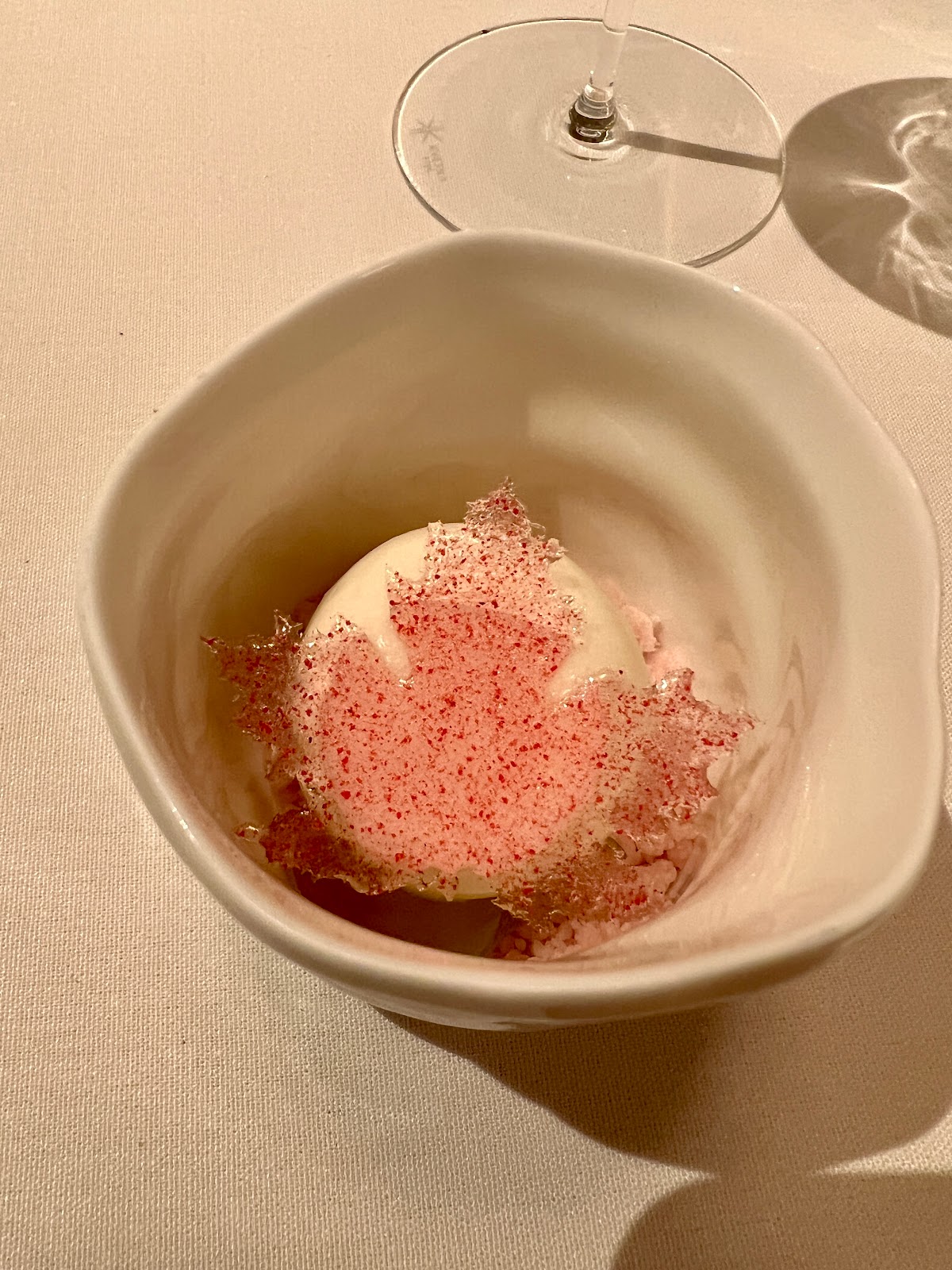 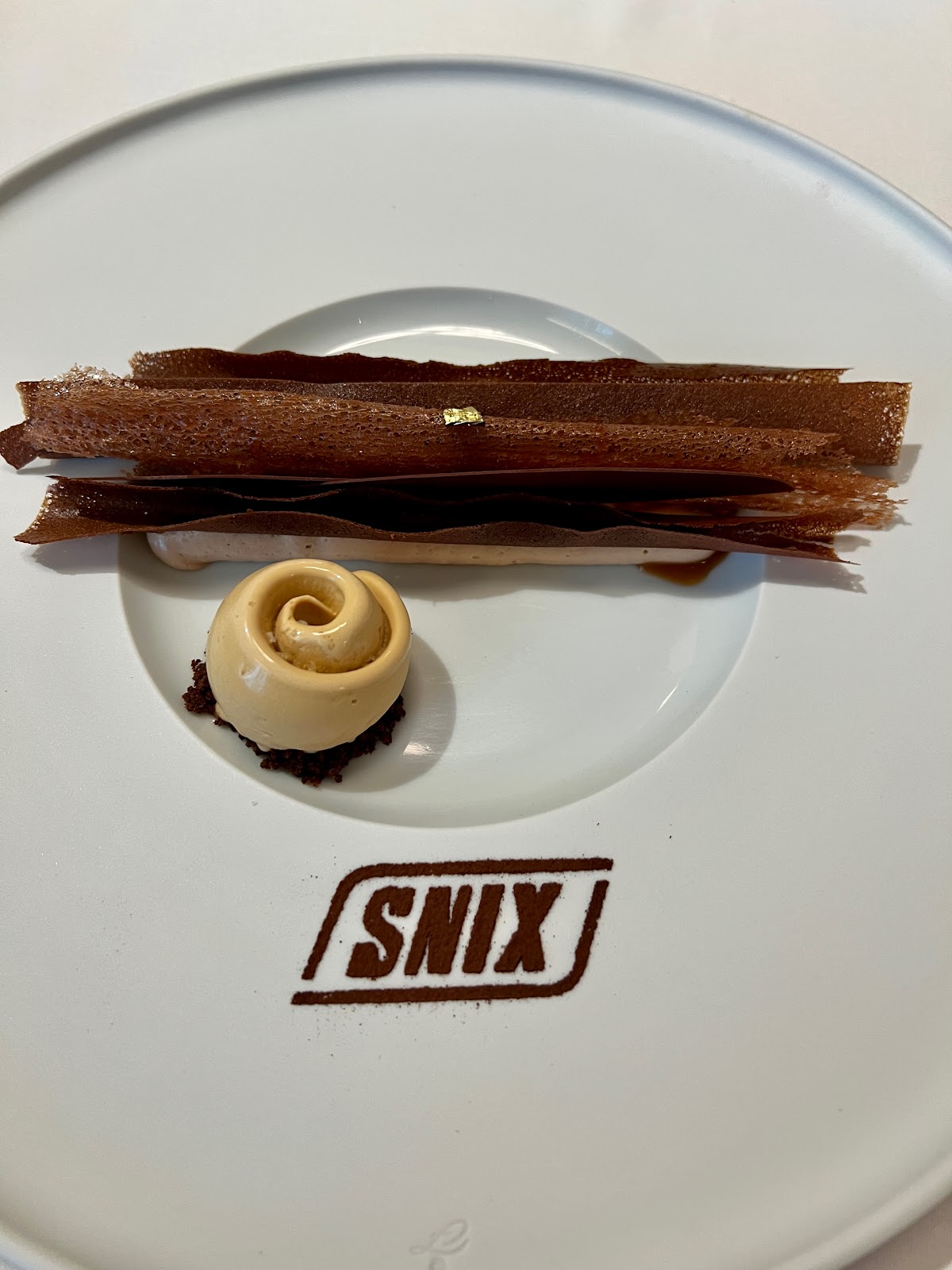 Not pictured: dark chocolate sauce poured afterwards, My thought when I was eating this: I flew 17.5 hours across the ocean to eat a fancy American candy bar. But I do love twix.
Douceurs:
Ice lolly (that looks like a coronavirus) 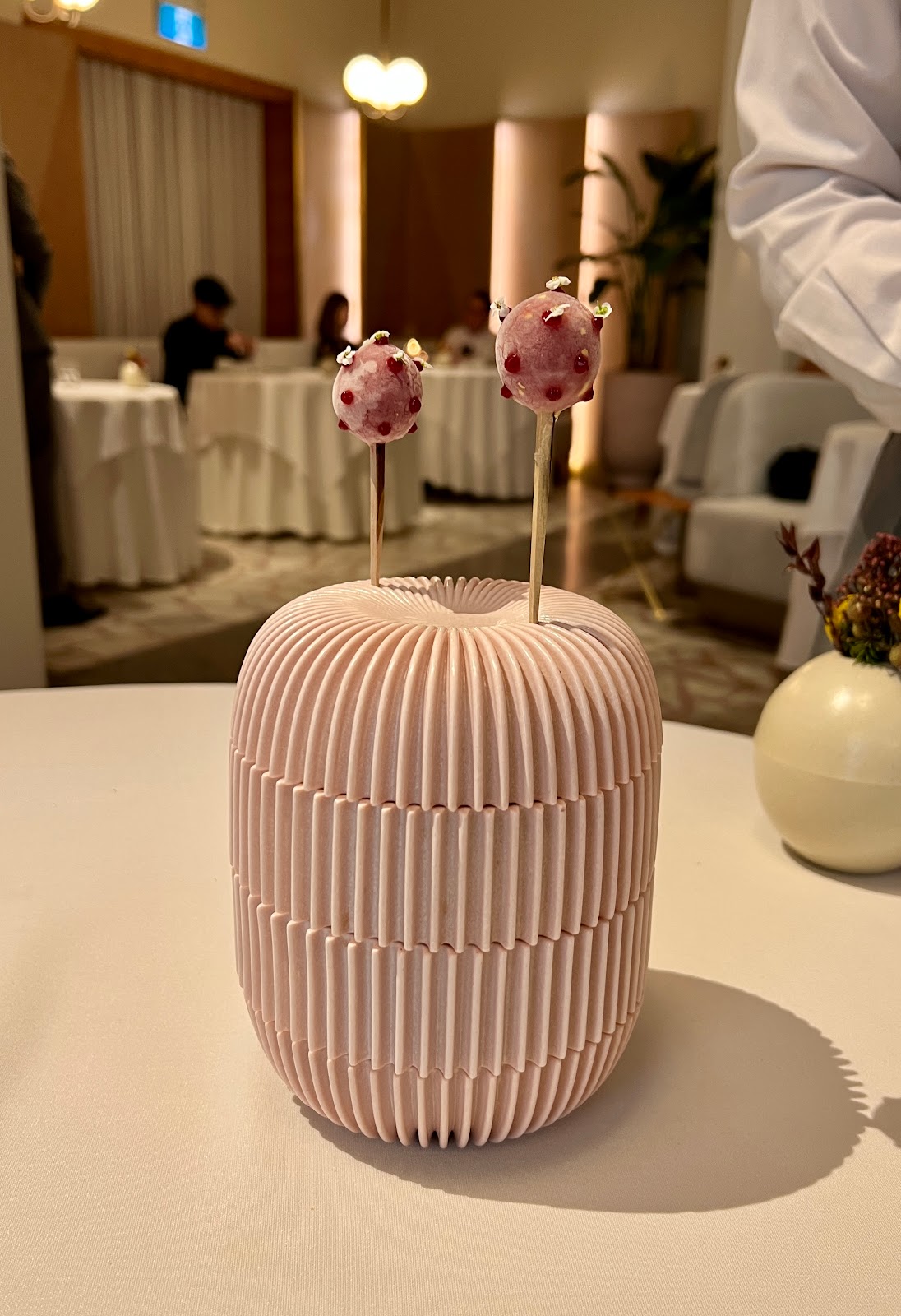 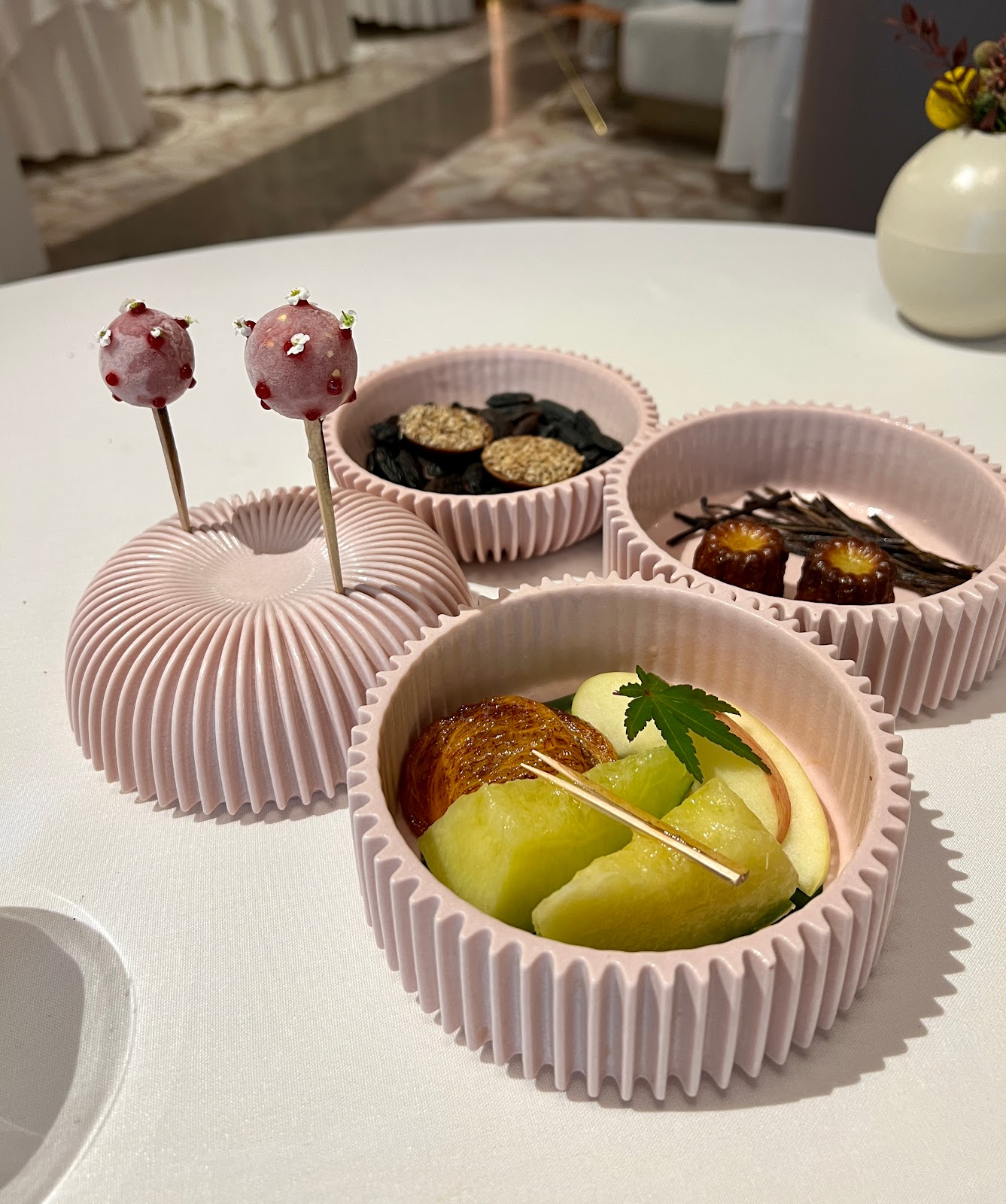 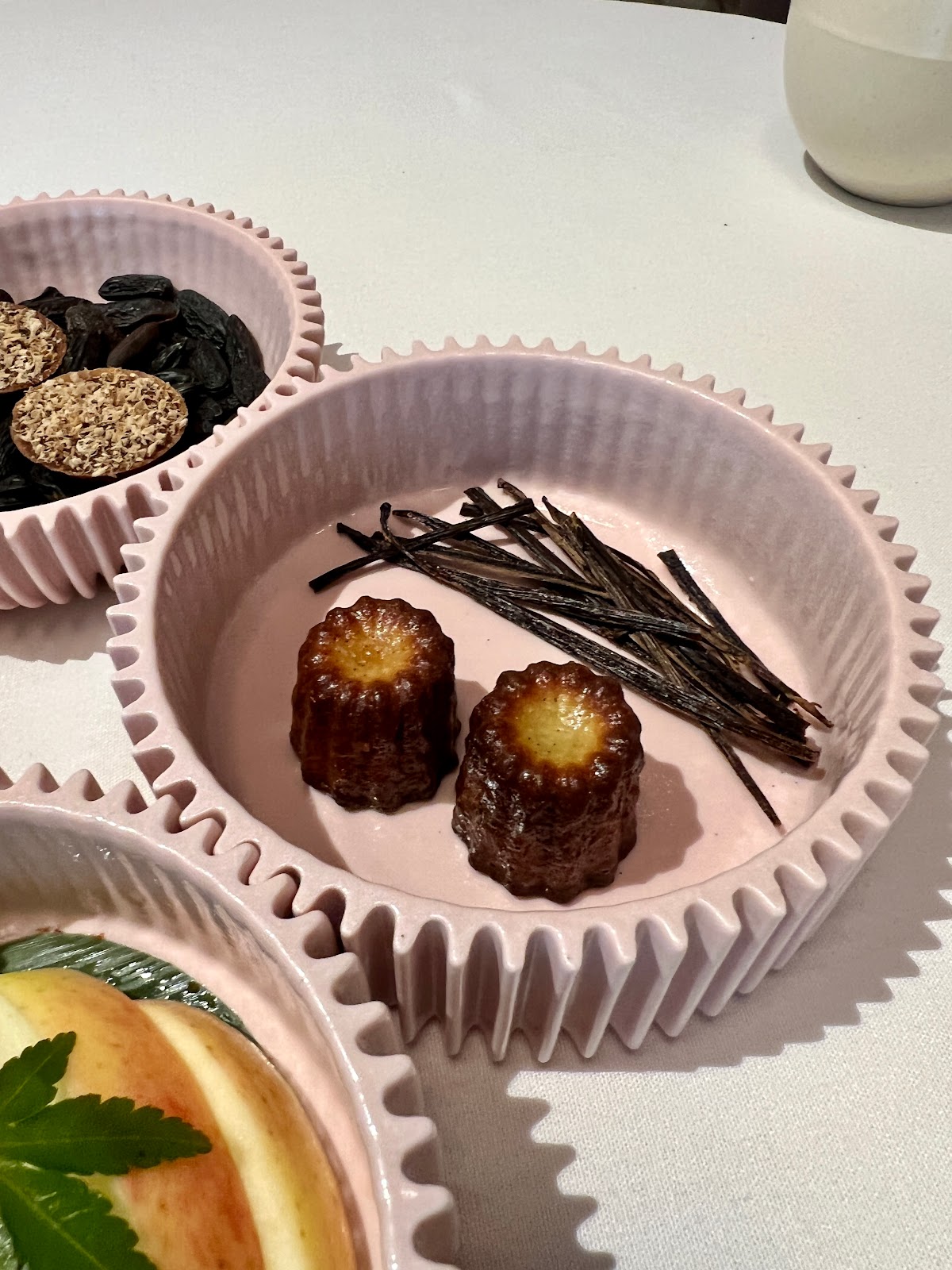 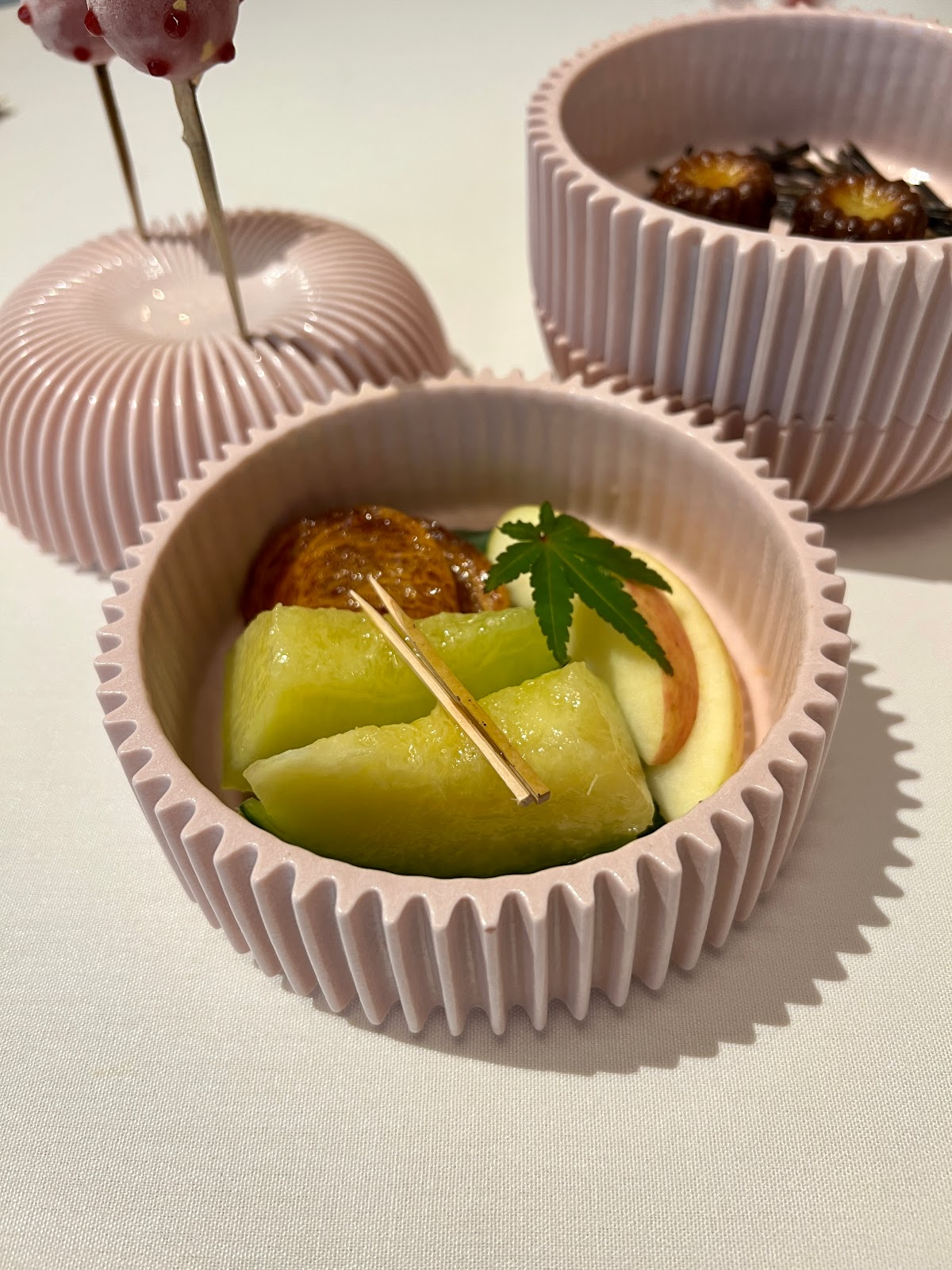 By the time we were having dessert the restaurant was closing around 3 pm. Chef Julien was gracious to stop by for a pic and to allow us a kitchen tour. 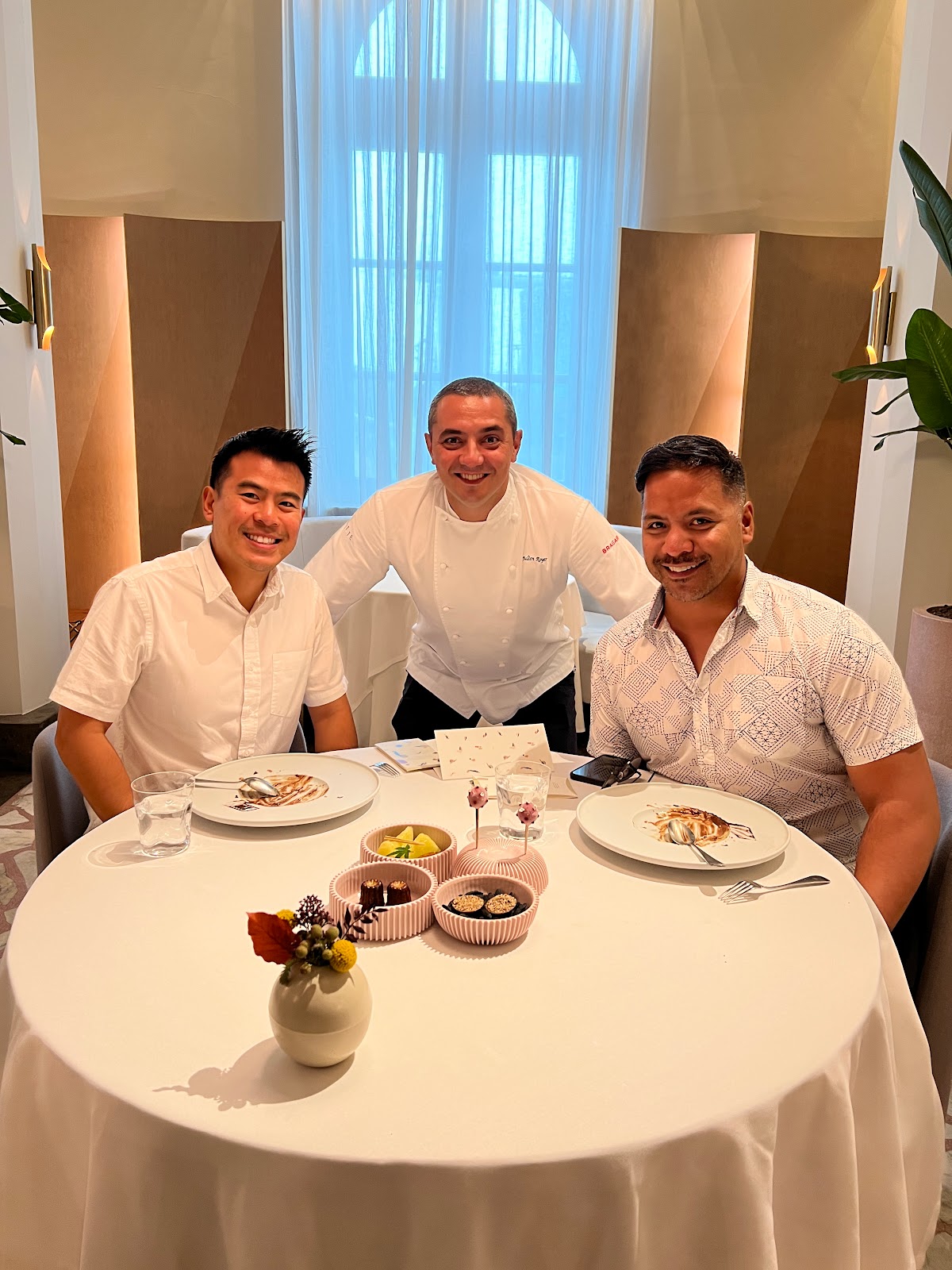 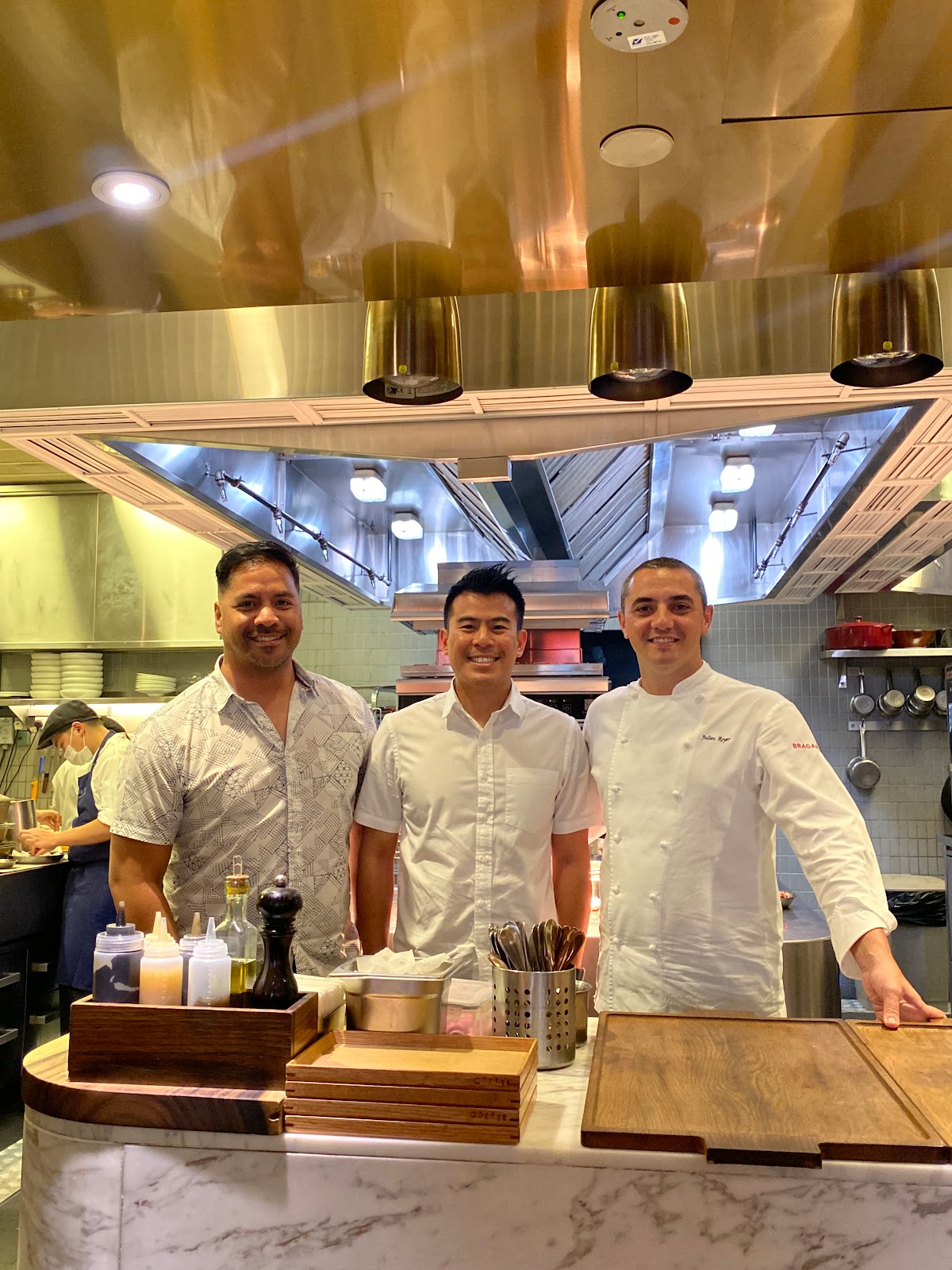 The whole meal was 2.5-3 hours. Service was impeccable and the food was art- but looked a lot better than it tasted. I could see how it's not in the top 10 of the World's Best Restaurants- but a place to try if you are in Singapore and Crazy Rich or a Crazy Rich Asian and like artsy food.