TL,DR; UCD was efficient, and getting the vaccine was a breeze. I even wore my special UCD appreciation shirt: 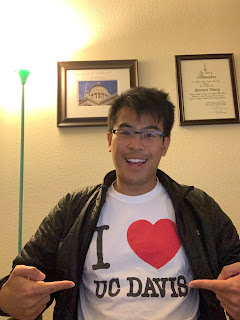 I got my first shot of a COVID19 vaccine yesterday morning, about 12 hours after signing up around 8:30 pm (2 hours after UC Davis health tweeted that anyone aged 16+ would be eligible to schedule a vaccination appointment.)

Scheduling online was simple and fast (although I have heard you can call now to schedule through the end of April.) After filling out some personal info online, I got an email confirmation for my appointment the next morning. There were lots of slots available since the news hadn't spread as much- and slots were in 10 minute increments. 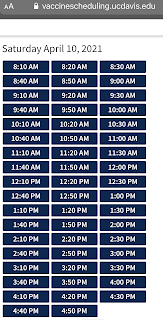 I also tweeted UC Davis Health's Director of Media relations to confirm that everything was legit.

The next morning, I arrived at the Sacramento Scottish Rite Masonic Center. There was plenty of parking, and even a golf cart offering to drive folks who parked further away. Upon entrance, greeters asked people if they were doing their 1st or 2nd dose. I was in line less than 5 minutes where I entered the reception lobby, where there were about 10 staffers processing vaccine receivers. I could tell I was going to get Pfizer since they had a large sign indicating that everyone in a certain room would receive that vaccine. 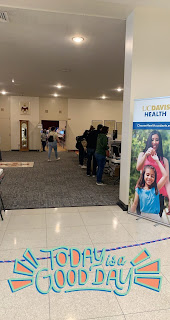 I confirmed my information with the receptionist, and was directed immediately to an open nurse station in the auditorium. There seemed to be plenty of stations open, as some staffers even mentioned they were redirected to observation rather than vaccine administration. The administrator asked several screenings, concerning allergies, reactions, etc., and filled out a lot of paperwork while checking several boxes on her computer. They then put the sticker on my card, gave me the vaccine (and a band-aid, which apparently some did not get from Kaiser), and I sat in a socially distant observation area for 15 minutes. 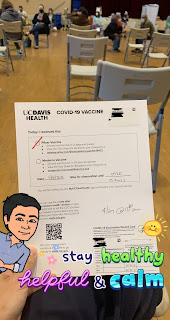 The observation room was overly staffed, as every 3 minutes I had someone walk by and ask if I was ok. Someone with a computer walked by during my observation period and I was able to schedule my 21 day second dose follow up.

After 15 minutes I walked out- I feel like I could've walked out earlier and the waiting wasn't super well enforced but most of the scheduling stations were near the exit. The process was overall very easy and was well under an hour!

For the last 36 hours I have experienced no symptoms and barely have a sore arm which I can fully move (unlike one person I knew who got Moderna). Although I wanted Johnson and Johnson, I am grateful to get a shot. If you're in the NorCal region, UCD had a great and legit vaccination experience!