- May 21, 2019
The Great American Lie (GAL), is a documentary by Jennifer Siebel Newsom, First Partner of California (thus, wife of Governor Gavin Newsom). 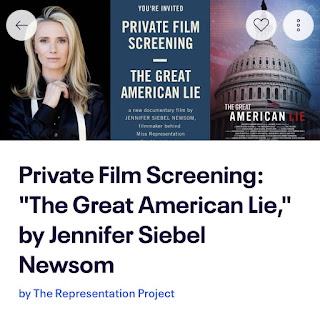 I attended a screening in Sacramento through my yelp friend Gregg R., where Jen introduced the movie and afterwards had a quick Q & A with the infamous Pam Wu (yay UC Davis connections). 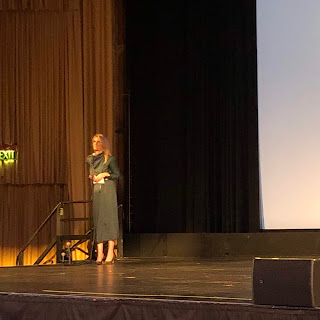 The documentary opens with a scene in Oakland of a child from a poorer neighborhood talking about what they perceive the "American dream" to be. The film is more of a sociological examination of American's problems with some political commentary, as experts (professors, lawyers, economists, and Gavin Newsom) explain how "a majority of Americans have been failed by the myth of social mobility."

The film follows various American's struggles: from a Oakland principal to an Ohio steelworker to a white lady in Louisiana with a racist mother and other people in the "majority." This touches on many themes: education, income inequality, gender inequality, mass incarceration, racial inequality, etc., all contributing to a broken system. The film poses "individualism" as a major problem and posits empathy as a step and solution to fixing these problems. The use of empathy as a story-telling device is well-used and many parts of the film are emotional and relatable.

While the documentary did highlight some key problems, it definitely attempted to tackle a lot of controversial issues at once and was all over the place- literally- from Oakland, to Louisiana, to NYC and DC, to Ohio. During the Q and A, Jen said the audience of the film was "everybody," but I find it hard to believe that someone who is working 75 hours a week (like one of the film subjects) would sit down for this 1.75 hour movie and be motivated to call for a systemic overhaul and cultural change. 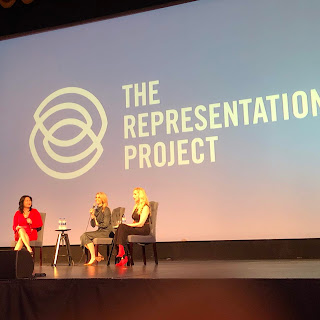 This film was meant to show the "crisis" we are having in America, and it does display the very real difficulties people in our country are facing as consequences of our political leaders- from kids needing to see therapists because they fear ICE raids, to struggling parents facing economic problems. The idea to use media to spread empathy is commendable and quite clever, as media consumes more of our daily lives. I don't think this film will be a cultural phenomenon like the Avengers or Game of Thrones, but I did enjoy the message of empathy as a means of bridging inequality.

TLDR: An interesting movie about America's systemic social problems. I recommend watching this film if you are interested in social justice or want inspiration to serve your community.
Government Great American Lie Movies Sacramento