- March 23, 2019
VietGone is a play/sorta-musical about love, loss, war, race, and family. I had credit from an unused Groupon (yes, some people still actually use Groupon), and used it to see the Sacramento production. I had heard about it since Simu Liu played the lead in Toronto, so that sparked my interest along with my general appreciation for Asian Americans representin' in the arts. 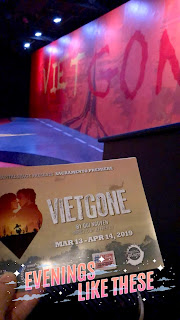 I say that it's like an Asian version of Hamilton mostly because there are a few rap songs, but also there are some really intense scenes and war is a big part of the plot. Another commonality is that some of the characters play multiple roles, which is sometimes confusing but pretty funny and impressive.

Rinabeth Apostol was definitely a highlight- playing a self-proclaimed bitch that had a super intense rap repeating "I don't give a shit!" I'm always struck by the portrayal of badass women and Apostol was so good.

Besides a strong female lead, the story is entertaining and shifts moods from light-hearted to intense that will definitely grab your attention. While the play serves as a tribute to the playwright's father, it is a story not only about an immigrant's struggle, but adapting to tough situations, family, and romance.

Vietgone is not your typical play/show about war but is a journey worth experiencing!
Asian Asian-American Theater VietGone