Queen of the Night by Alexander Chee: Book Review

- March 24, 2019
The Queen of the Night is a crazy, dramatic journey of an opera singer, Lilliet Berne. I originally started reading it right after my trip to France in August 2018, inspired after roaming the streets of the Marais and learning a little more about Paris after spending a couple of days there. It took me a while to get through this book, as I discovered I'm not a huge fan of opera and the story is confusing with so many characters to follow. 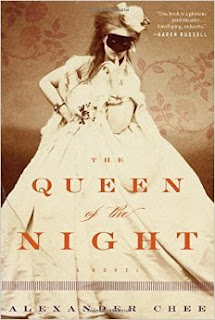 This novel is told from the perspective of Lilliet Berne, "a legendary soprano with every accolade except an original role." Her life is insanity- the beginning opera scene did not appeal to me as much as the story of her family hardship, traveling to another continent, joining a circus, becoming a prostitute, forming a web of love and affairs, and surviving seiges.

To me, the narrative was confusing partially because it is meant to be: there is mystery surrounding the start even though the story is from the perspective of the protagonist, and there are flashbacks and fast forward. But also many parts dragged on and sometimes it was hard for me to follow what was going on because I became disinterested with excessively long descriptions (i.e. a list of fur coats/accessories- maybe it's interesting to opera type folks).

This wasn't my favorite book, but a few themes stuck out to me:


Overall, Queen of the Night has some exciting moments and nice tributes to actual historical European events, but it was very confusing and hard to follow. At least I learned I'm not a huge fan of opera.
Book Review France Paris