After leaving the Governor's Office in August 2018, I became a Deputy Attorney General (DAG) working for the CA Department of Justice/Office of the Attorney General (AG). The AG himself is the state's Chief Law Officer, and Xavier Becerra won the most recent election this past November.

This is the 3rd time I've seen Xavier give a speech in person.

This morning, he had an inauguration (partially to celebrate the fact that he won in an election, despite people telling him that he was lucky he got appointed). It was in Sacramento and open to DOJ employees. Below is the inauguration program. 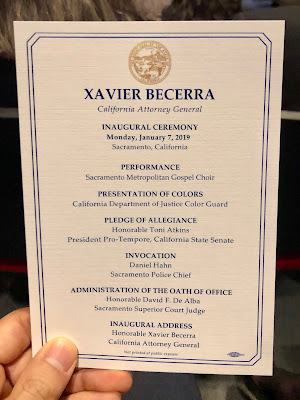 my favorite part is the "not printed at public expense" 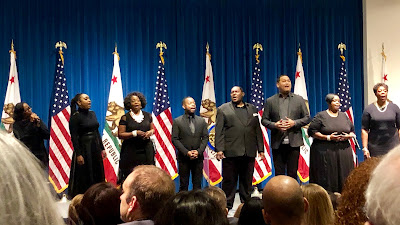 The Sacramento Metropolitan Gospel Choir sang "Oh Happy Day, " and it was an uplifting and spiritual start to the ceremony. The singers started clapping halfway and many of the attendees clapped along. Becerra did mention that he would've liked them to sing "Lean On Me," but they had a time limit so one song was all they were scheduled for.

Next was the color guard, and it wasn't high school girls like I was expecting, but 5 men in uniform carrying guns and flags (a US flag, CA flag, and a DOJ flag). I thought it was interesting that the DOJ/AG's office had its own flag, and that as part of the salute the California flag and DOJ flag were lowered while the US flag stayed up.

The Invocation and Administration of the Oath were nice, with both public officials commenting on Becerra's background growing up in Sac, becoming a public servant, and dedication to his community. Becerra's daughters, son-in-law, and wife joined him for his swearing in, and Judge De Alba was a mentor who also previously a DAG. 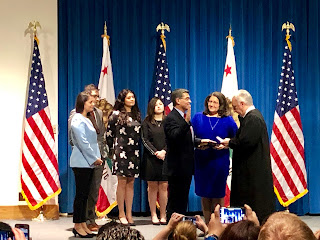 Becerra's inauguration speech was very personal- he of course thanked his parents, his family, and other supporters, and talked about representing the interests of consumers, minorities, and immigrants, basically the heart and soul of California. He listed several humblebrags about California being now the 5th largest economy in the world, and a leader in environmental justice and individual rights. Lastly, he spoke about what he wanted to accomplish the next four years, and how he hopes to pilot the DOJ and bring out the best of all DOJ employees. I later heard from Chief Deputy Attorney General Sean McCluskie (second-in-command) that Xavier agonized over his speech, but it was definitely worth it as I felt emotional when he was talking about his family and what they meant to him.

After his speech, we walked into the museum reception area, where there was food and a live band. 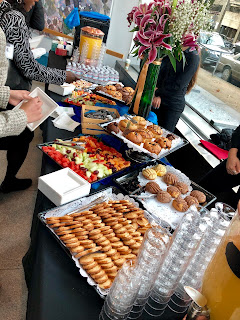 The food can be described in two words: cultural and Costco. The cultural part was the Mexican concha, which is a cookie topped bread. The costco was the muffins and palmiers. It was definitely very representative of a state party. 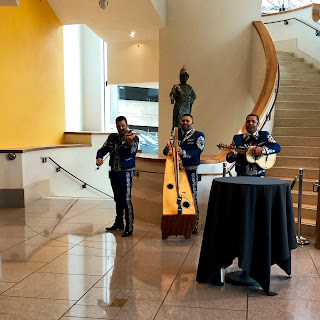 The mariachi band started playing as soon as attendees entered the reception area. It felt like the ending scene of "Coco!"

Towards the end of the reception, Xavier went around saying hi to people, and my section Senior Assistant AG, a Supervising DAG, and my other DAG colleagues got a photo with him and his Doctor wife Carolina Reyes (#couplegoals). 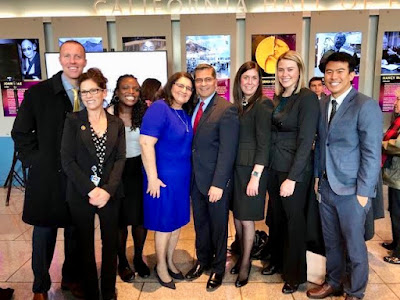 Even though being a state government worker does not have the greatest pay and is not the most glamorous life, hearing my boss speak today affirmed the "warm glow" feeling of being in public service and inspired me to continue working towards his mission of making the California dream available to my community.
Attorney General California Inauguration Law Public Service Work