I got a ticket to see cello master Yo Yo Ma at the Greek Theater on UC Berkeley campus through my good friend Jocelyn. 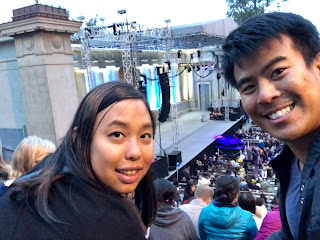 After eating bomb pork and chicken buns and decent ramen at Ippudo and getting fluffy but lacking-in-flavor lemon cake from an almost-breadless 85 degrees, Jocelyn and I hiked up to Cal's outdoor amphitheater. If you do ever go to the Greek- I'd recommend first trying to get lawn seating because it seems so chill, but if you sit in the amphitheater bring a cushion and dress appropriately (it gets cold at night/generally in the bay). 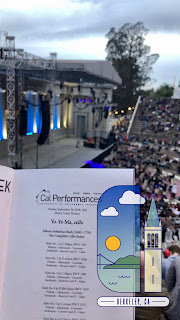 Yo Yo Ma played a 2 hr and 15 minutes set of 6 Bach suites, with no intermission and very short breaks. He performed only by himself- no symphony or orchestra. I have never experienced a show like this- it was sometimes awkward and uncomfortable to silently sit for so long but at the same time so peaceful and a time for some introspection.

Here are some of my thoughts during the almost 2.5 hour show:

30 min in...
5 min later, shutting my eyes...
Around halfway through the suites-
Observing Chinese student next to me:
Around 3/4 of the way in...
At the end: it felt like running a half-marathon or that I survived something that I was trapped in. I was almost proud, like sitting for 2.5 hrs made me accomplish something. But at the same time I felt re-birthed, like I came out of a deep sleep and went through something that will make me a better person. 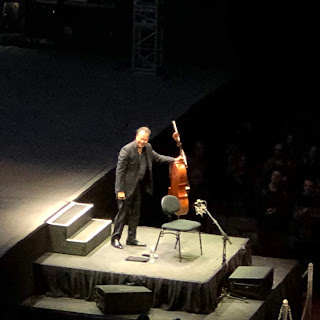 Overall, seeing Yo Yo Ma was a unique experience. Sometimes it felt very long, but it was moving and I feel like I gained almost a new appreciation of life.
Bach Berkeley Cello Music Yo Yo Ma