After Madrid, I flew to Nice since my trip to Europe was supposed to be for visiting my UCLA UKS buddy/senior year college roommate Chanrith, and he wanted to see the French Riviera. Before flying, I used my Priority Pass for the 3rd time this trip- and the Sala VIP Plaza Mayor lounge might've been my favorite. 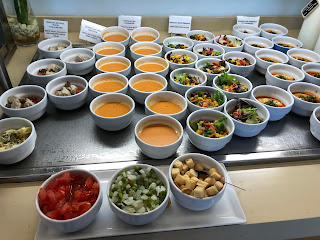 There was a wide selection of warm foods in ramekins- ranging from risotto to chicken pasta to minestrone soup. I also indulged a light chocolate pudding. They also had small sandwiches and fresh fruit packaged to-go, and this would serve as a perfect afternoon bite on my flight to France.

My flight experience with Iberia was very good. Flying into Nice on a clear day was great because you can see the view of the French Riviera (I had the window seat and was on the left side of the plane flying from Spain). Meeting Chanrith and the the Nice airport was easy since the airport is pretty small. We Uber'ed to our hostel, located near downtown about 15 minutes away walking from the beach.

Check in was interesting because a guy was complaining to the front desk that his roommate had urinated next to the bed. Of course this was the room that we were checking in to, but by the time we got up it seemed like it had been cleaned. It felt too late to change to a hotel though and everything was pretty expensive (would've cost over $75 per person a night), so we stayed. We changed and got ready to walk to the beach.

Luckily by 7:30 the sun hadn't set yet, but the sun doesn't set over the water in Nice since there are slight hills to the west and the Mediterranean (Med) Sea is to the south. It was still good weather though, so we went into the water a bit. The water was pretty salty and the beach is rocky, so a lot of the smart Europeans had water shoes or strap on sandals. 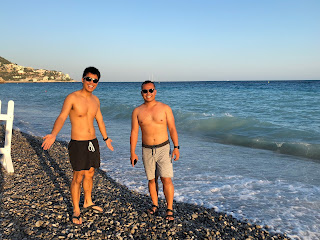 Right after the beach, we went to a Frog restaurant, where Chanrith got a platter of frog legs and I merely tried one of his and ordered a duck breast dish for myself, which was sadly overcooked. 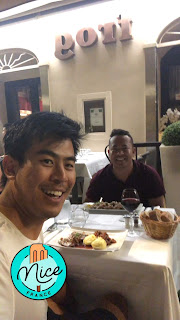 After dinner we walked down towards the Promenade Des Anglais- stopping by a hotel where Chanrith played roulette for over half an hour routinely betting on 0 but 0 never showing up.

The next day, I wanted to go to Monaco since it was on the Amazing Race, I could technically cross another country off my list, and it was also the setting for Cars 2/the actual Grand Prix. From Nice Port we took a 1.50 € bus- which took about an hour and a half to Monaco. The bus there was nice (I was really trying to avoid that pun) since the road along the French Riviera is so scenic: the houses on the hills overlooking the Med could really be a painting.

We got to the Monte Carlo around 11, stopping by for a quick photo outside before heading in. 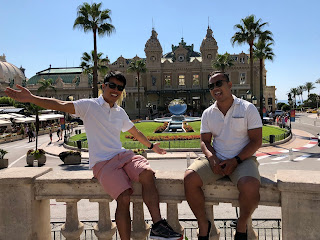 I really had to poop, so I paid the stupid 17 € entrance fee to get into the gambling area, learning that they didn't allow visitors in until 2 PM and there was no bathroom available in the lobby area. I had to use the public bathroom in the parking lot nearby like a plebeian.

To kill time, we walked down the course of the Grand Prix, stopped by some stores, and had lunch at a grocery store (it was basically the most reasonably priced option). We walked up the hill (I almost took the bus but decided to not be a little bitch and walk a short 10 minutes) to a very nice view from the Prince's palace.

We made our way back to the Monte Carlo (I took the bus this time while Chanrith walked and he got there faster but my feet would thank me later), where it was finally 2 and we went inside to gamble. The gambling area is super fancy- there is a great big ballroom at the end with a view of the ocean that reminded me of the "Beauty and the Beast" ballroom. I didn't take pics because I saw the black domed cameras everywhere and didn't want to get kicked out.

I did gamble at the 25 € minimum blackjack table - partly to say I gambled at the original Monte Carlo, partly to win back the stupid 17 € entrance fee. I only exchanged about  50 € for chips, and on the first hand I got a 10 + 3, hit for an 8, and prayed that the dealer would not get 21. I won my first hand and then quickly withdrew my winnings (I am very risk averse as an economics major), content in saying that I beat the house.

After that we took the bus back towards Nice, stopping by Eze beach which was less crowded than Nice and more picturesque. Once back at Nice, we had doner kabob for dinner (they are everywhere in Europe and basically a more legit halal guys), and it was the best value meal I had on my trip.

The next day, we took a train from Nice to Cannes. Home of the Cannes film festival, there actually wasn't much besides the movie theater/convention center and fancy restaurants advertising that Brad Pitt and Julia Roberts ate there. 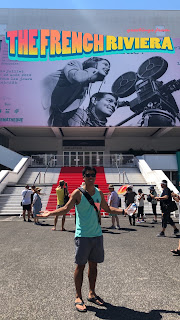 We walked to the Place de la Castre, a hill overlooking the city- for another nice view of the French Riviera: 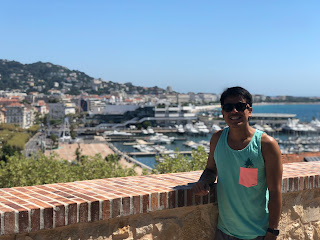 We headed back to Nice for the beach and dinner, and then called it a day since Chanrith had an early flight the next morning.

Overall, the French Riviera was very "bougie" as one of the major beach destinations in Europe. My favorite part was just seeing the coast and the homes along the hills and the Med. I was pretty disappointed with food- unfortunately August is vacation time for the French and some of the restaurants on TripAdvisor that we wanted to try were closed. Also it was quite humid- so maybe spring is a better time to visit Europe than late summer. I'm still glad I got to check out Nice and Monaco, and relaxing at the beach definitely helped balance out the hustle and bustle from rapid sightseeing!
Cannes France French Riviera Monaco Nice Travel