Madrid - Museums, Palaces and so much more

- August 24, 2018
From Bilbao I took a 5 hour train ride to Spain's capital- Madrid. I was only "moderately pumped" about Madrid, but Madrid was probably my favorite city during my two week Eurotrip; from the culture to the history it was fun and exciting- almost like a mix of NYC and Washington DC. The train station was a little crazy and reminded me of NYC's Penn Station- but luckily I was able to ask for help and hop in a train in a couple minutes to my hostel.

After checking in, I walked a few minutes down various alleyways to get to my first destination: Museo Reina Sofia. The Reina Sofia is one of the Golden Triangle of Madrid's museum and features mostly contemporary art but also the famous Spanish artists Dali and Picasso. I spent 3 hours here, the museum was humongous and there was so much to see. The highlight was definitely "Guernica," (originally the primary reason I decided to stop in Madrid): 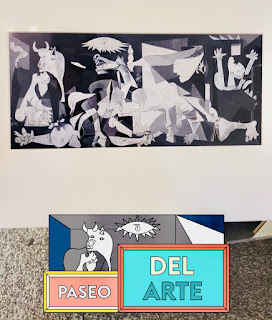 this is a pic of a postcard- no pics of the real thing!

Guernica was huge- around 10' X 30'. It took up and entire room and two security guards were making sure people did not take pictures. I did however see a few people taking pics from the other room or pretending to make a phone call but sneakily taking photos. The exhibit also discussed the history of Guernica, and it definitely drew the largest crowd.

Besides Guernica, there was a large Richard Serra exhibition, some Chagall, and some Yves Klein, Kandinsky, and other artists. My feet started to get tired, so I went to the gift shop, got a postcard for my cousin Millie, and then walked to my next destination: the Prado museum.

The Prado is closeby to the Reina Sofia and also free after 6 PM on certain nights. At 6:15, the line looked really long, but was only about 20 minutes to get in.  After using the bathroom, I only stayed for 30 minutes because I was supposed to meet a friend for drinks, but the Prado was pretty different- featuring non-Contemporary, mostly religious themed art. One of my favorites was Queen Isabella the Catholic dictating her will (not pictured). 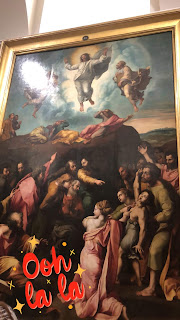 After the Prado, I got drinks with my college friend Melanie, who happened to be in Spain walking the Camino. 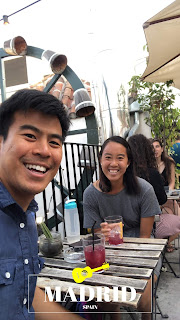 We then walked from Plaza Mayor to the National Palace and had some pinxos nearby, catching up since it had been over 5 years. Madrid had perfect weather in the evening, not humid but nicely warm and slightly breezy. We walked by the Mercado de San Miguel- and I eyed some food booths that would be my lunch tomorrow.

The next day, I did a free walking tour with Sandeman, and it was very informative and interactive- I learned about the history of Madrid, the Spanish royalty, and made some new friends from Australia. Yay for other English speakers!

Post tour I embarked on part 3 of Dan Brown Origin tour: the Almudena Cathedral. Although I'm pretty sure the Catholic Bishop no longer resides in the Church, it was cool to walk through a major setting of the novel. As I walked the narrow stairways to the rooftop, I felt myself getting closer and closer to God. 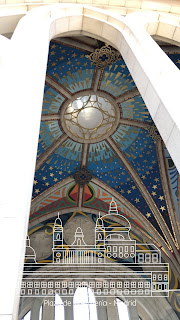 Also, the Cathedral had an amazing view of the city, and I did feel closer to God at a higher altitude with a sweeping panorama of lush greenery looking down the mountain ranges.

After the Cathedral, I stopped by the market, where I had a crab and caviar slider 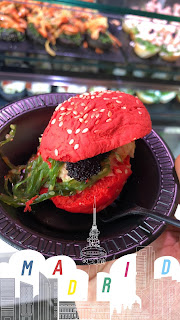 and a very refreshing mint, soursop, and spinach juice. 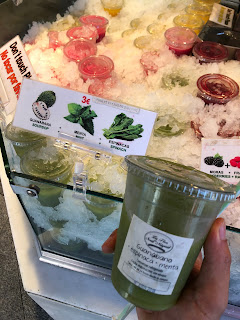 I also stopped by a churro place, where the churros seemed stale and almost cracker-like, although I did like the bitter chocolate to dip it in. 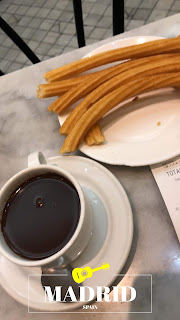 After resting at my hostel a bit, I went to the rooftop of a shopping mall to have some Sangria and see the Times Square-esque view. 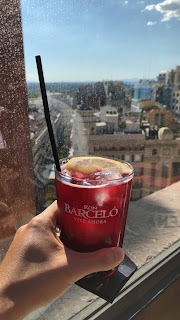 I ended my last night in Madrid drinking at my hostel, and the crowd ranged from privileged white girls traveling Europe for a month to people from SoCal who had just taken the bar exam, to South Korean guys who were traveling alone. Even though drinking with these young people was one of those "I'm too old for this shit" life moments, I'm still glad I got the "European hostel experience" and that people [my hostelmates] guessed that I was 25.

I wish I got to row the boat in the Parque de El Retiro and see the Palacio de Cristal, but I'll have to come back to Madrid since my Dan Brown Origin tour was incomplete - I didn't actually go inside the Royal Palace and also have to see El Escorial and Valle de los Caidos (day trips from Madrid). There's also Segovia and Toledo, and so much more to see. I learned that 4 days is definitely not enough time in Spain, but I'm excited for the next time I go back and check out some of the best gastronomy, and visit Seville, Granada, Valencia, and San Sebastian.
Churro College Guernica Madrid Picasso Spain Travel UCLA