- August 22, 2018
I left Barcelona the morning of August 7, catching an 11:45 AM flight to stop 2 of my Dan Brown Origin tour: Bilbao. I checked out of my hostel, took Aerobus to the airport, passing by the Pl. Espanya and the view of the Museu Nacional d'Art de Catalunya. Security through the domestic terminal took 3 minutes, and before I walked to my gate I saw a swanky sign to a VIP lounge (sala Pau Casals), checked my phone to see if priority pass allowed me access, and lo-and-behold it did! [Priority pass is amazing in Europe.]

The lounge itself was great- I had my first sip of complimentary bubbly- ate some pastries, sandwiches, and mango ice cream, packed some water, and charged my phone and other devices before my short 1.25 hr flight to Bilbao. 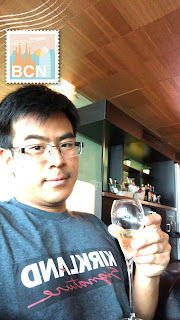 My flight to Bilbao was through Vueling, a Spanish airline, and it was great- easy check-in, enough leg room, and friendly flight attendants (Vueling may have been my favorite airline on the trip.) Descending into BIO, I noticed the tons of greenery and rivers in Basque, and after deplaning the climate was cool and air was relatively clean. I took a 3€ bus to downtown Bilbao- noticing the Spanish here was a completely different dialect that I did not understand.

After around 19 minutes the bus went down the iconic Puente de la Salve: 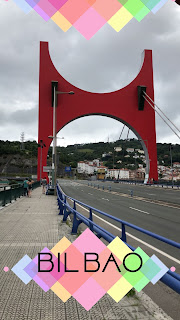 and past the Guggenheim, (essentially the only reason I flew into Bilbao). 10 minutes later I was downtown, checked into my hostel, and stopped by a very basic cafe to indulge in a matcha latte, egg tart, and ham toast. 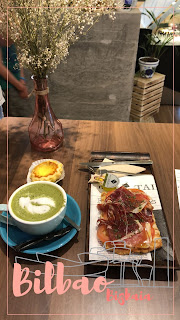 I walked around 15 minutes to arrive at the Guggenheim, where I walked around the outside since I was half an hour before my ticket time [that I bought online in advance.] There were several tourists, and one of the first prominent pieces of art is a large sculpture made of flowers in the shape of dog: Puppy by Jeff Koons. 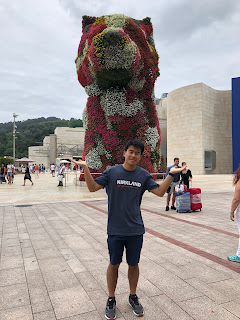 I walked down some stairs, down to a bridge along the river and the Guggenheim. To the right was Anish Kapoor's (famous for Cloud Gate/the Bean in Chicago and also has a piece in front of Monte Carlo in Monaco) Tall Tree & The Eye. 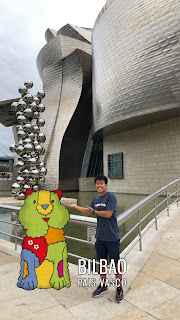 I walked by the F.O.G. piece which was unfortunately turned off (and is play off architect Frank O. Gehry's initials), but marveled at the monster spider Maman by Louise Bourgeois. 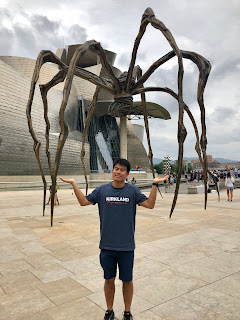 Interestingly, la arana had colorful eggs inside of its sac. Maman represents the beauty of life, but also something deadly since spiders can eat their husbands.

I walked back up and went inside, where I spent almost 3 hours looking at contemporary art pieces. Some highlights included the ginormous Matter of Time by Richard Serra: 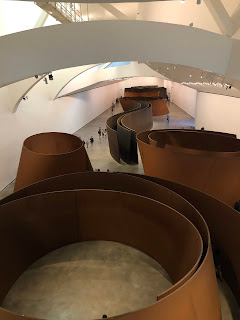 Jenny Holzer's LED words: [not pictured]
I walk in
I watch  you
I scan you
I wait for you
I tickle you
I tease you

And the Yves Klein and Rothko. [also not pictured] - a lot of exhibition did not allow photography actually.

A lot of the exhibitions were disturbing- they featured a Chinese artist that was Ai Wei Wei-esque but visceral, and just other weird pieces. After walking around, I went to the cafe, were they had some pinxos, but I thought I would try some at a local place (which I failed to do), so I regret not eating them at the Guggenheim. I walked on Puente de la Salve to get a view of the Guggenheim to end my visit: 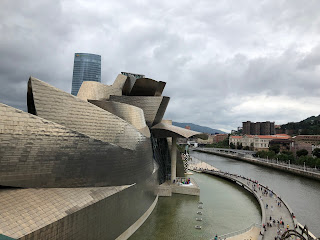 Post Guggenheim I wandered around Bilbao, where a lot of the girls eerily reminded me of an ex-attorney at the Governor's Office. After sitting at a park playing Pokemon Go and enjoying the cool weather compared to Barcelona, it started to sprinkle and I went back to my hostel to knock out since I had a 9 AM train ride to catch the next day.

While checking out the Guggenheim was cool, I wish I researched a little more on gastronomy around Bilbao and just tried some pinxos at the museum. Also, I've seen a lot of similar art in museums in LA (Koons and Serra pieces were basically the same), but it is interesting to see how contemporary art is common all around the world and see that people from all types of culture can appreciate art.
Art Basque Bilbao Guggenheim Spain Travel