How to make the most of Pixar Fest at Disneyland Resort

- June 02, 2018
It's been two weeks since I've been to Disneyland. Although part of me is glad I don't work there (saw a lady complain to a cast member that her baked potato had bacon after she had devoured the whole thing and she was trying to get a refund), part of me misses being an annual passholder/lowering my IQ for a day/embracing my inner child. Right now, Pixar Fest is the current theme at Disneyland Resort from now until September 3rd. 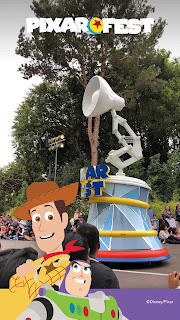 1 out of 3 Pixar Fest Snap Filters I found

Essentially, there are a lot of themed foods, a few picture and character-meet opportunities, a new fireworks show, and general hype for "Pixar Pier" to open later this summer in Disney California Adventure (DCA). 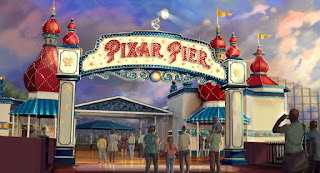 I spent 12 hours on a Sunday at Disneyland and 3.5 hours on a non-holiday Monday at DCA, and checked out some of the food and fun. Here are my tips to make the most of Pixar Fest:

1. If you can, go with an Annual Passholder

Annual Pass-holders (AP), get 10-15% discount on food [and a discount on merchandise], so that saves at least tax. My cousin Millie came in clutch with the savings, so thanks for fronting all the cost on food! The cashiers also do not take credit or debit card unless it matches the passholder's name, so they need to be in your party. If you really want to save $, find a castmember that has extra sign-ins and you'll save $ instead of spending over $100 on the ticket alone!

2. Download the Disneyland app
The Disneyland app allows you to buy/link a ticket online, see the wait times for attractions, buy MaxPass (see #4 below), and generally help you plan your day to make your experience more enjoyable. It will slightly drain your battery, so bring a back up charger.

3. Go to the parks early
When the park opens at 8 AM, try to be at the Toy Story parking lot at least half an hour in advance.  Toy Story is not in some winding parking structure with a long wait for a tram, but a simple lot with a relatively shorter wait and a quick bus ride. After getting from the parking lot (which takes 15-30 min from Toy Story or 45 min/1 hr from Mickey and Friends Parking Structure), you have to wait in line to get through security (which took me over 15 min) and then to get into the park (not so bad in the morning). Also, the lines for attractions tend to be shorter in the morning, so go on Peter Pan, Space Mountain, Indiana Jones, Radiator Springs Racers, Guardians of the Galaxy, or any other E-Ticket Attraction that can get to an hour+ wait.

4. Get MaxPass
MaxPass is a $10/day add-on to a ticket where you can reserve Fastpass onto the Disneyland mobile app, link tickets so you can obtain Fastpass with a group, and reserve Fastpass quickly after usage without having to walk to the physical Fastpass dispenser. Also, you get free high-quality Photopass downloads and ride pictures. The convenience alone of not having to cross the park to reserve Fastpass made MaxPass worth it in Disneyland. You can pre-purchase a ticket with MaxPass on the Disneyland app, or simply buy it on the app and activate it after your park ticket has been scanned/you have entered the park.


5. Plan your meals
There are a lot of exclusive food items on sale in both parks for Pixar Fest, and some are still being released!

For Disneyland:
In the morning, go to Jolly Holiday/Cappuccino Cart by the castle. There's Pixar donuts (not pictured) at Capp Cart, but other pastries (left to right): Up Nutella pop-tart, Rose gold/Millenial Pink Minnie Macaron, and a Grape and Peanut butter Up Eclair. 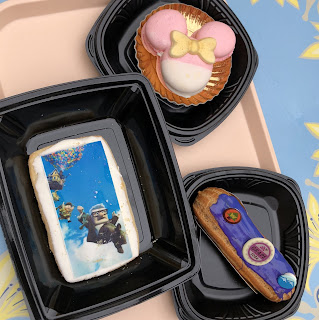 The best thing on the tray was the macaron, but it was really sweet. The pop-tart was pretty dry and overly sweet, and the eclair had a lot of grape jam, which wasn't really my jam.

If you're a fan of big macs and pizza and don't mind paying over $8 for a single slice of pizza, the Pizza Planet Cheeseburger Pizza in Tomorrowland reminded me of a big mac. 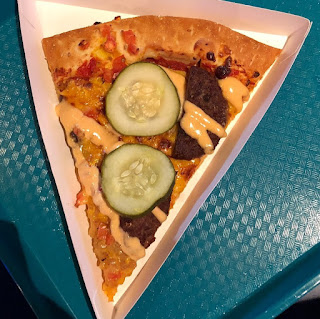 Pizza planet also has two alien desserts, and I tasted some of macaron #2: 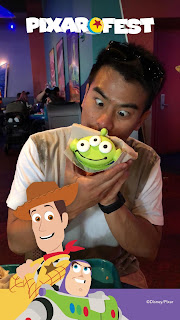 This macaron was tastier than the Minnie, Blackberry-Lemon flavor with a tasty lemon curd inside.

Also, I don't know if it was because everyone was trying Pixar food (churro and popcorn lines were long, but the Dole Whip line was shorter than usual in the afternoons- and this chemical concoction is always refreshing in warm SoCal weather. 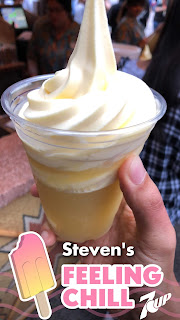 Speaking of churros- I really wanted to try the Coco one outside Rancho del Zocalo but the line was like over 30 min long in the afternoon. Same with carrot cake churro in New Orleans square - this was where you could buy the AP Churro Challenge map to get a pin, but the wait here probably got to 45 minutes. There is also a pineapple churro near the castle. If you want a churro, I recommend going as soon as the carts open.

Other things I tried towards the end of the day were the Pixar cake at Plaza Inn, and a Western themed loaded hot dog from Coca-Cola refreshment corner. Neither were spectacular, although the cake pretty much screamed "Pixar." 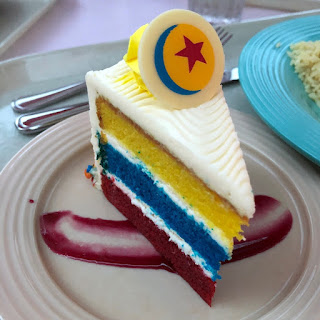 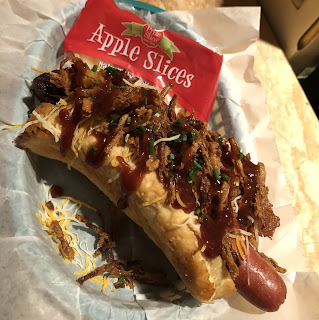 The apple slices had over 100% of my daily Vitamin-C!

For DCA:
I don't think food items are available super early in the morning, but after 10 AM you can go to Schmoozies in Hollywoodland for the best thing I ate from Pixar Fest: a Monsters Inc marshmallow cronut. 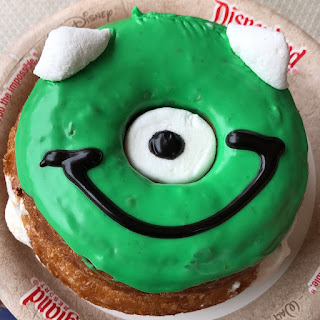 You HAVE to smile looking at this. The whole thing was buttery, decadent, and delicious. The marshmallow creme was also not too sweet.

Also new in "Pixar Pier" is the Adorable Snowman frozen treats, and I sampled some of my cousin's "Snow-Capped" lemon treat (lemon non-dairy dole whip dipped in white chocolate) and it was tasty! 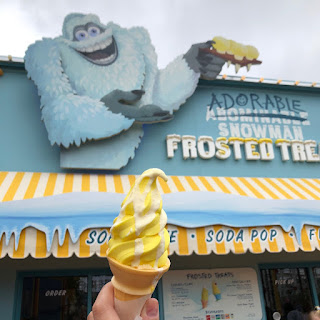 The wait here was crazy long though- we waited at 10:15 and didn't get it til 10:55 (they technically open at 11). Hopefully they speed things up here.

Overall, Disney is upping their food game and you can just look up #pixarfest on Instagram to see food updates since they are rolling out hip new instagrammable eats!

The "Together Forever" Pixar themed fireworks show is touted as a "multimedia" experience, and is more than just fireworks- which you can witness from Main Street. The best part was definitely the crowd going NUTS at the "Coco" portion, and many parts of the show were heart-warming and it's something best experienced with a crowd. The show is usually around 9:30, but you can get a decent spot in Main Street if you start waiting around 8:30 PM.

Pixar at the Happiest Place on Earth does make for a fun experience, just expect more people, spending more $, and missing feeling like a kid again.
California Disneyland Food How-To Pixar Treat Yo Self