What is the biggest sacrifice I've made in life?

- May 09, 2018
I'm guessing that 98% of you didn't watch the California gubernatorial debate last night, but I also missed portions since I tuned in and out (I watched a portion of 6:30-7 PM but then switched to Jeopardy! from 7-7:30.) [Also, there is an upcoming election in California so register to vote!] 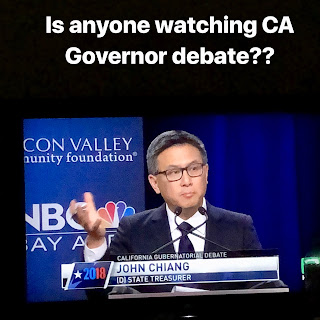 Anyways, my friend Rachel shared an article by the SF Chronicle:  What have they sacrificed? Most California candidates fumble the question. The question started off: “People and families across California are making big sacrifices to live here. Long commutes to work. Working two jobs. Going into debt to put their kids through college. In light of their sacrifices, what is the biggest sacrifice you have made in your life?”

Essentially, only ex-mayor of LA Antonio Villaraigosa had a relatable answer: he sacrificed time with family in pursuit of "wanting to change the world." Gavin Newsom said that our sacrifice should be "to take care of the next generation" [very Miss Teen USA 2007-esque... "I personally believe that, U.S. Americans are unable to do so... for our children."] John Chiang (pronounced "Chung") talked about being discriminated against and called a Chink/Jap/Gook and "growing up to help life's underdogs." While the candidates were prepared to discuss immigration and education, it is a simple question of sacrifice that offered politicians a chance to connect with voters. But I don't blame the candidates for "fumbling," since we rarely regularly ponder our sacrifices in life.

To me, sacrifice entails putting someone else's needs before your own. I remember conversations in my 10th grade Pre-AP English class, after reading Dostoevsky's Crime and Punishment- discussing whether someone can be  truly altruistic and act for the better good of society without thinking of themself. Being the extremely selfish person that I am, I always try to craft ways to benefit other people that also benefit myself- because why help someone when there is a cost or harm to yourself? Obviously there are answers such as morals, love, etc; and some situations do require giving up something that would've made your life better for the benefit of someone else.

Personally, I think my parents have sacrificed the most to make my life better: having me when they were 23, starting a business so that they had some financial security to send my sister and I to college, investing in raising me instead of their own personal travel/entertainment so that I had a better chance at the American dream than they did. While they were lucky enough to escape the Khmer Rouge, they had to learn a non-native language, leave behind their possessions, and assimilate into non-Cambodian culture. Part of me finds parenting selfish - extending your bloodline, raising a mini version of yourself, showing off kids/hoping they will help you if they become more successful. But another part of me realizes I can never give my parents what they gave me, besides unconditional love, I strive to be the best person I can be to make them proud.

In light of their sacrifices, my life has been posh: I grew up by the beach in a very low-crime suburb, I got to travel on family vacations, go to school, and now I'm an attorney for the highest political office in California. The biggest sacrifice I've made in life is not truly being myself around my parents to uphold the "model minority" image, and missing out on "fun" to be responsible. I don't discuss a lot with my parents: my mental health, dating life, etc., but I hope to overcome my shame and build a better relationship with them as I generally spend less time with them as the years progress. I also wanted to be a "trophy child" for my parents- always following the rules. I only tried weed after it became legal (and somewhat because of peer pressure), and somewhat regret missing out on "fun" moments like not trying it in college or going to "x" party or travelling somewhere when I had the chance.

Even though my sacrifice is not monetarily significant, I wonder how different my life would be if I didn't have these regrets. The time I've sacrificed that would've enriched my life may possibly have affected other's live more positively. All I can hope for in the future is a life with as few regrets as possible, and surrounding myself with people who I'm willing to make sacrifices for.
Asian Asian-American California Career Fun Government Health Law School Los Angeles Sacrifice