- April 08, 2018
As part of my foodie journey, I went to Noods Noods Noods (NorCal edition) in Oakland, an instant noodle-themed food festival put on by Nissin Cup Noodles and Foodbeast. I found out about the event because my cousin tagged me in a Facebook post showing that one of the vendors, Chick N Rice, would be serving a thai tea cooler with mango sticky rice. My other cousin told us that all the major food instagrammers go to Noods Noods Noods, so as a Yelp Elite wanting to step up my food  influencer status, I proclaimed that I was "interested" on the Facebook event page.

When we first got to the venue around 12:30, we saw a long line, and learned the event hadn't opened yet even though it was supposed to be open at noon. I really had to pee so I ran to the bathroom while Danna saved our spot in line, and I went into the adjacent E-Sports arena where hundreds of nerds gamers were in a Super Smash Bros. tournament. When I got back the line had barely moved, but there was a poster of the event so at least Danna and I got to take our first selfie. 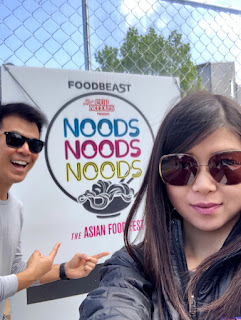 After 15-20 minutes, we got into the marketplace area, where we were handed the "very veggie" version of cup ramen and took a pic with the wall of instant cup noods. 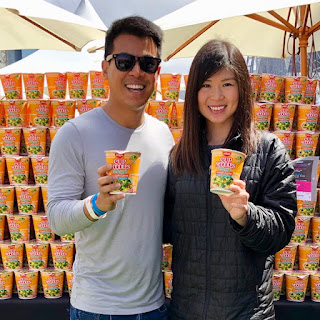 The marketplace area was basically a food truck gathering, and there were maybe only 5-7 trucks while the website listed 11 different options. I got in line for poke from the Bonito Poke truck [mistakenly thinking it was 808 poke shack serving pop rock marinated poke,] while Danna got in like for Kurotaka Ramen. It took 30-40 minutes for us to finally sit down with our food, and we took our food pics and then chowed down. 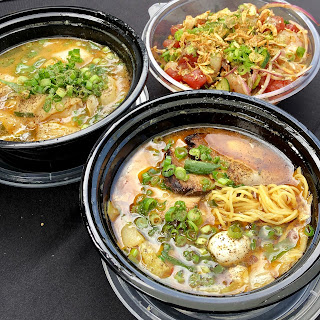 I started off with the poke before moving onto the heavier ramen. I customized a bowl with half tuna (for me) and half shrimp (for Danna) atop sushi rice, with onion, fried shallot, ginger, furikake, green onion, and sesame dressing. The fish was nicely marinated and the sushi rice was warm and a great texture. The noods I tasted were not as good, I had the signature Kurotaka bowl, which had two pieces of chashu, a quail egg, a little cabbage, and a mild soy based broth. For me it was much too oily, and I struggled toward the second half of the bowl as the noods started to feel too much for me.

The lines for the trucks started to get longer and I only had a couple minutes left on my parking meter, so Danna and I decided to check out the ESports arena to see if there was anything else instant-noodle-related inside. Besides the gamers, there was a huge mural of cup noodles, a sign saying "send noods," cup noodles along walls and tables, and pillows saying "noods noods noods." We got pics with the noods pillows. 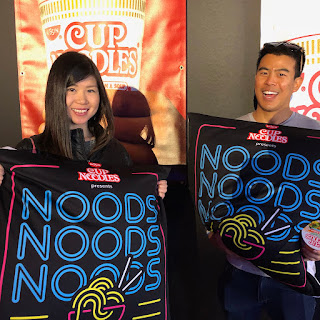 Overall, it was cool to check out a festival honoring instant noodles, but there were a few areas that could be improved. The marketplace venue was really small compared to the amount of people there, and I saw some people eating their food on the parking lot staircase outside or sitting on the sidewalk. The festival organizers know how many tickets they sold, and could've provided for enough chairs per attendee. Also, it would've been nice to know which vendors came at which time, so I wouldn't be disappointed if the nood dish I wanted to try wasn't available. The best Asian-[American] food market I've been to so far was the 626 night market in 2013, but it took them a few months to get their act together so hopefully Noods Noods Noods will improve over time. Otherwise, I'll be waiting until I go to Japan's Cup Noodle Museum to truly satisfy my needs for an instant noods experience!
Asian Asian-American California Food Fun Japan Noods Noods Noods Noods Ramen Social Media Yelp