Why I love the Winter Olympics

- February 22, 2018
It takes a lot to get me to switch channels from Jeopardy, but from the start of Opening Ceremony I've been glued to my TV watching the world's best ice skate, snowboard, and ski in pursuit of gold and glory. The Winter Olympics doesn't get as much love as the Summer Olympics, yet I still find myself watching sports I never cared about (i.e. the women's hockey final between U.S. and Canada) and getting emotional when the athletes react to their performance. Below are a few reasons why I love the Winter Olympics [alternatively, my favorite moments from the 2018 Winter Olympics in Pyeongchang.]

Figure skating is more than a sport, it's art and expression and drama tied with competition. Music plays a major role and it's interesting to see different interpretations of classics such as "Black Swan" and "Clair De Lune." Rarely does a sport move you or evoke emotions, but the best figure skaters (see Yuna Kim 2014) do just that. Also, I now want to see Yuzuru Hanyu in person so that I can subsequently see it rain Pooh Bears onto the ice rink.

Another reason this sport is so great: Figure skating = Asian-Americans finally getting the spotlight in the media.
I grew up watching Kristi Yamaguchi and Michelle Kwan with my family, and it was inspiring to see Asian-Americans display athletic ability in front of a large crowd. 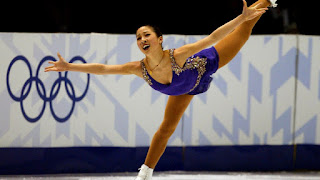 The US team this year didn't disappoint in Asian-Am representation (most of these athletes being figure skaters): 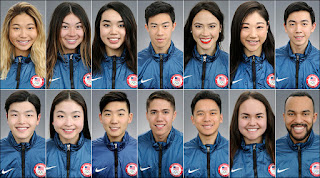 Even when favorite-to-win Nathan Chen faltered, it was amazing to see the output of support that led to a redeeming free-skate (reminiscent of Mao Asada in 2014- a moment that still makes me tear up). Vincent Zhou was another highlight, along with The Shib Sibs, Mirai Nagasu, and Karen Chen. Also I loved the shout-outs of all the California hometowns such as Torrance, San Jose, and Fremont. Hopefully this trend of Asian-American skaters and competitors keeps growing!

2) The Olympic Theme is Epic

I didn't know that it won a Grammy (thanks HQ) but hearing it is super inspiring and makes me feel like I can conquer anything.

3) The announcers getting overexcited and screaming

The only person whose voice exceeded that level of excitement was my law school's westlaw representative basically screaming at us in my legal writing class.

4) It brings people together

I will always associate watching the Winter Olympics with family time: from the tiny TV at the back of my uncle's donut shop to eating dinner at home with my parents - we watched ice skating and heard the various anthems as athletes strived to show that they were the very best. Even if I will never get close to that level of athleticism, I'll always marvel at how some people train their entire lives to make history in their own way. Also, I have #dadgoals to aspire towards after reading how Chloe Kim's dad would drive her hours for her to practice snowboarding. 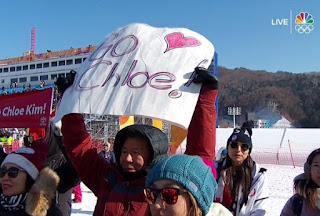 I probably won't pay attention to winter sports until 2022 in Beijing, but it's these little moments of TV that remind me of why I should be proud of my country and inspire me to be the best person I can be.
#Goals Asian Asian-American California Childhood Health Life Olympics TV