My attempt to make Winnie the Pooh Cupcake Cones

- February 27, 2018
I come from a family of bakers (my dad was a donut baker, and lots of family members still bake). I also watch tons of Great British Bake Off and Baking Championship shows on Food Network. So below is my audition to be on America's Worst Bakers.

Winnie the Pooh is one of my favorite Disney characters (my mom still calls me Pooh bear) and after seeing hundreds of Pooh Bears hit the Olympic Ice after Yuzuru Hanyu's short program, I was inspired to bake something Pooh-related. 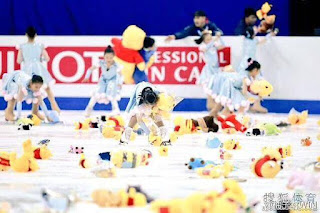 Last week, I saw a recipe for Winnie the Pooh Cupcake Cones on Disney Family's Social Media, and declared to my friend Nida my desire to bake and cure the rumbly in my tumbly. (Also shout out to Rachel for inspiring me to blog about this, though I merely have sad pics and no vid). 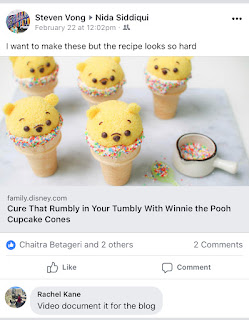 If you clicked on the recipe, you'll see that it is complicated AF. I decided to just use $1 yellow cake mix, hoping that it would suffice. I went to Wally World and got 24 ice cream cones for $1.68, the yellow cake mix, white icing, rainbow sprinkles, and chocolate chips to melt for the face decorations. Unfortunately, Wal-Mart did not stock silicone dome molds, so I ordered one on Amazon. Instead of the 6 dome mold, I thought, I should buy the one with 8 and smaller molds. (What I'm trying to say is, I'm a disaster).

I set the oven to what the Disney family website recommended. I followed the recipe on the box in terms of ingredients, but just made random guesses for measurements. I tried portioning the cake mix according to the box, using 1/2 cup of mix, 3/4 of an egg (I attempted to split the yolk in half but only got 7/8 of the yolk), and splished some olive oil and water hoping that it would be the proper amount. 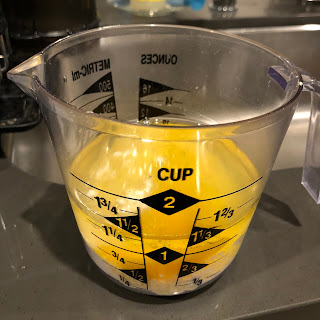 I mixed it with a spoon and it looked somewhat normal, and then dolly-ed it out in my silicone dome molds. I baked my cake concoction at 300 degrees for 15 minutes. 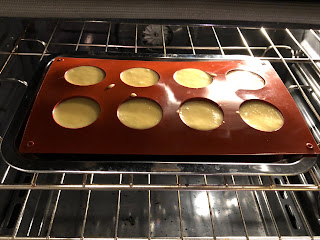 After 15 minutes, I took it out, put a knife in it, and it wasn't baked. Panicking, I realized I was a dumbass and should've baked it at 350 according to the box. I increased the temperature to 350 and set my Apple Watch timer to 3 minutes and tried calming myself by watching Chopped on Food Network. After 3 minutes, I go back to check and it's still not done! So I just let it sit another 5 minutes, poke it until it's not runny, and then take them out to cool.

By now, I'm halfway into today's Jeopardy/basically giving up on the cakes. But once Jeopardy ended the cakes seemed completely cooled and they pop up pretty smoothly to my pleasant surprise. 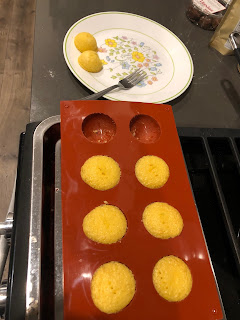 I melted chocolate chips in a candy melting bowl in the microwave, while telling my housemate Annie I had no idea what I was doing. I ask for toothpicks to attempt to draw Pooh's features on parchment paper, but run out of space on my sheet so I decide to try to pipe on 4/8 of the Poohs. By this time my Poohs look like they birthed out of radiation. Attempting to get the chocolate features from the parchment paper was even more of a mess, as my warm fingers melted the delicate chocolate and things fell apart.

I had a bunch of leftover chocolate melted in my bowl, so I thought I'd used that to coat the cones instead of the white frosting I bought (I was too lazy to melt white chocolate like the original recipe called for). I thought I would try to sprinkle the frosted cones over a plate so I could save some if I spilled, but I still somehow miss my plate and a few stray sprinkles fall below the kitchen counter. As the sprinkles softly scuttle along the wood floor, I tell Annie that I will sweep once I finish my monstrosities. She passes by and attempts to encourage me after I called my cupcake cones monsters. After I get through decorating 6 of my 8, I give up and tell Annie I'm not okay.

So how did they turn out? 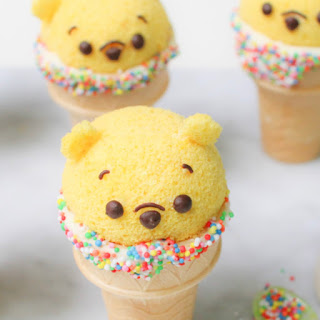 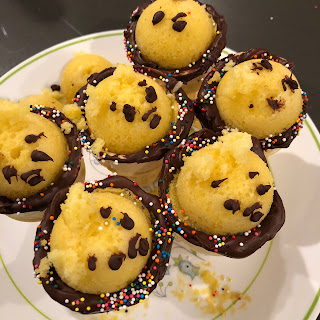 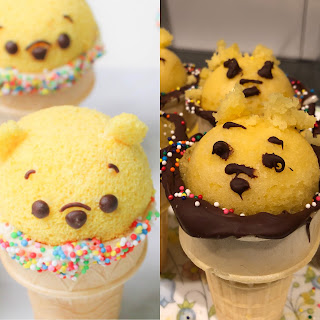 At this point I was thinking: it can only taste better than it looks. So I took a bite- and the cake was pretty decent and the dessert wasn't overly sweet! So I'm at least proud my Pooh was edible.

If I learned one thing from this experience, it's confirmation that I can totally be on America's Worst Bakers. Who wouldn't want to see me on that show?!?