What is it like in a sensory deprivation float tank?

- December 06, 2017
There's lots of problems in the world: we could get blown up by a nuclear missile any day, LA is on fire, and the list goes on and on. Instead of addressing these problems, I chose to shut myself in a sensory deprivation float tank/sleep pod for an hour. I came across a deal on Groupon for a two hour float and massage combo, and thought "treat yo self."

First things first: signing the waiver. (Law school has made me so wary of everything in life). I basically agreed that I may be subject to a claustrophobic experience and that I was in normal health/wouldn't infect their pod, etc. They also made me check off why I was interested in floating: and I selected "reduce muscle soreness" and "decrease stress."

I was then taken to my room, where I first saw where I would spend the next hour: 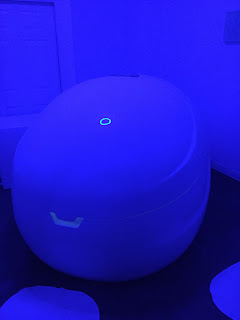 The attendant explained the process: I had to shower, put in silicone earplugs to block water, knock on the door to tell them to start my session, enter the pod, close the lid with the internal handle, and float. After getting comfortable in the pod, I could then press a green button that would turn off the inside light.

The first 10 minutes: There was noise simulating the departure of a Caribbean cruise. Even with my ears plugged in, I heard ocean waves, seagulls, boat noises, and the occasional dolphin. This was supposed to help me "become one with the water," but I found it distracting.

Instead of drifting off I was trying to get a sense of my body in the pod. The pod was roomy- I am 5'7.75" and I could fully extend my arms straight up. I could bend my arms 30 degrees before touching the sides. The water was barely over 6 inches deep, only the top inch or so of my body was above water. The water was around the temperature of my body, and I could feel parts of my body getting a slimy sensation due to the heavily concentrated epsom salt. After a preliminary check of where I wanted to float (near the handle in case I needed to open the pod), I turned off the light.

The next 30-35 minutes: I closed my eyes and focused on my breath. I wasn't able to fully relax though; my upper body was incredibly sore. The thing I gained most from the float was being very in tune with my body. The smallest things were magnified; I could hear when I twitched, when my teeth rubbed against each other, and even my heartbeat. I spent a while trying to figure out where to position my arms, but my shoulders and neck were very uncomfortable and I struggled to stay completely still.

The last 15 minutes: For only about 5 minutes my body felt at ease, and I was finally able to feel relaxed. A couple minutes later, the boat noises came back, and a few minutes after, a robotic female voice said "Your session is over." I got out, but a little bit of the water splashed near my eyes and it burned because of the espom salt.

Immediately after leaving the pod I felt slightly refreshed. I didn't feel extremely heavy afterwards, but my neck and upper back were still sore. Unfortunately the massage afterwards exacerbated my soreness, but I didn't research whether this spa had legit therapists (mine was a rookie).

Apparently you need at least three 1-hour long separate sessions to fully start experiencing the benefits of floating. I did like having a heightened sense of my own body. However, I hated trying to be completely still so I don't think I'll go back. Even though I wasn't claustrophobic, I wasn't able to empty my mind and enter that state of meditation to make the most of my float. If you're the kind of person who likes to do nothing to relax, maybe floating will work for you. The only way to find out is to try! (or put in hundreds of pounds of epsom salt in your own tub, but ain't nobody got time for that.)
Health Life Treat Yo Self