- December 15, 2017
Everybody wants to find love, so who better to tell us how than the comedian who plays Tom Haverford on Parks and Rec? (But forreal I have mad respect for Aziz who is making a name for Asian-Americans in the media.) 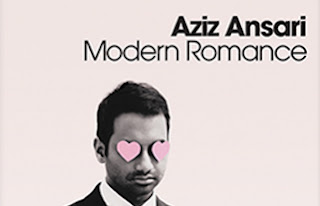 Anyways, I started Modern Romance after hearing good things about it from friends, and was lent a paper copy from my friend Danna (personalized with post-its marking her favorite quotes). Having seen Parks & Rec, Master of None, and Aziz's standup on Netflix, I fully read this in his high-pitched voice (and he even tells you to read certain parts in his voice). His [sometimes annoying] voice represents the voice of a tech-savvy, urban millennial who is navigating the obstacles of dating and relationships in our ever changing society.

His book is somewhat selfish as it serves to answer the questions surrounding why he faced difficulties in his own dating life (although a friend in LA told me that someone told them that they saw Aziz walking out of a club with a girl in each arm (objection- double hearsay)). But where his  story-telling ability shines is his being able to make his journey relatable: from his interviews of different people growing up in different places, to using cell phones and how frustrating it is communicating with other people.

Two parts of the book really stood out:

1) Modern dating viewed from an international comparative lens
Aziz travels to different countries to see how they view online dating. It's truly fascinating to see how even with the same technology, culture shapes a large part of how people date.

2) The statistics
Aziz co-authors his book with experts such as sociologist Eric Klinenberg and several psychologists. There are a multitude of graphs displaying data related to dating, such as the marriage rate and how people meet their spouses. It makes me wonder of how much data we have yet to collect in the future - particularly as online dating becomes more common and technology changes the way we meet people. Some of the statistics in the book are predictable, but others are completely shocking.

Aziz's take on this topic that affects basically every millennial is of course funny (though I had to read the book in spurts because I can only handle so much of his "style") and surprisingly scholastic. I think that anyone who interacts with other people would benefit from reading Modern Romance, as its core message reminds us that even though technology may alter how we communicate, we are still humans with feelings. If you don't have time to read, try listening to the audible version and you'll really hear how Aziz intended to tell his tale!
#Goals Book Review Life Treat Yo Self